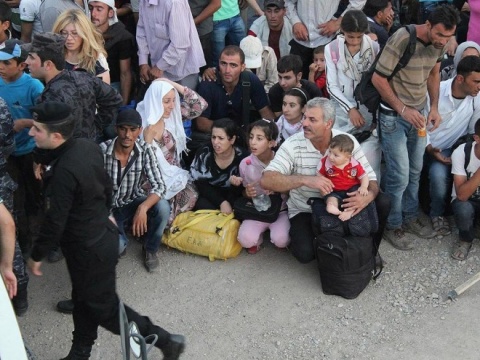 Several people sustained injuries after clashes with police during a riot in a refugee shelter in Bulgaria. Photo BGNES

Two immigrants have their arms in cast and one has a crack in the head after a riot at the refugee shelter in the southern Bulgarian town of Lyubimets.

The information was reported by Bulgaria's largest private TV channel bTV, citing information from the hospital in the nearby city of Haskovo. The tree Algerian nationals have been examined by a doctor and have undergone X-rays at the hospital.

The management of the hospital told bTV that one of the foreign citizens had a sprained middle finger, the other - a fractured wrist, and the third - a head wound. After being treated, the three were sent back to the shelter in Lyubimets. Employees of "Border Police" have not been admitted and treated in the Haskovo hospital on the night of the incident.

On Saturday, after being silent for days, the Interior Ministry admitted that a riot has taken place at the shelter on November 30, in which immigrants clashed with police.

The country is the gateway to the European Union for refugees fleeing Syria via Turkey, many crossing the border illegally. It has shown both the lack of preparedness of state institutions to accommodate the refugees, as well as the latent xenophobia of parts of Bulgarian society.

Interior Minister Tsvetlin Yovchev proposed a plan for reducing the number of illegal immigrants as along with asylum seekers from Syria, a large number of people from North Africa and the Middle East also cross the southern border with Turkey. The plan includes deportation of the latter.