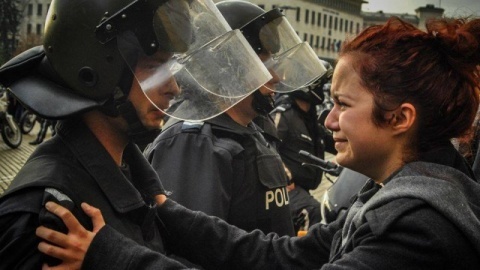 Desislava Nikolova gained popularity after an emotional photo of her and a riot policeman went viral on social media in November. Photo by Stefan Stefanov

The father of 15-year-old Desislava Nikolova, one of the recognizable faces of the ongoing protest movement in Bulgaria, has been called for questioning by police.

Filip Nikolov told news website Offnews.bg on Friday that he was summoned for questioning by the Sofia Directorate of the Interior Ministry following a controversial tipoff from Bulgaria’s Child Protection Agency.

A spokesperson for the Agency has cited an article published by Svobodno Slovo, a pro-government tabloid website, claiming that the 15-year-old girl has been “smoking banned substances.”

“There are allegations that (protesters) have abused the child after giving her alcohol,” the spokesperson, Lyuba Spirieva, has told Offnews, citing the Svobodno Slovo article.

Desislava Nikolova gained popularity after an emotional photo of her and a riot policeman became viral on social media in November.

The ongoing anti-government protests in Bulgaria were triggered by the appointment of controversial media mogul Delyan Peevski as Chair of the State Agency for National Security in June – and were fueled by a number of other controversial appointments and wider concerns about corruption.