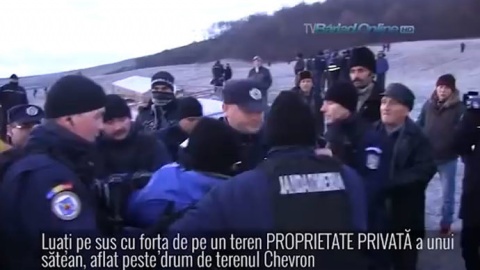 Villagers in remote Romanian commune of Pungesti have said they are driven to despair by US energy giant Chevron's starting of shale gas exploration in the area.

In October, Chevron had given up plans to prospect for shale gas, but resumed them in November.

Pungesti residents had staged a road block, but Tuesday it was brutally lifted by riot police and gendarmes who clashed with the villagers, detaining some 30 people.

Thursday tensions are still rife in the commune, reports Romanian daily Adevarul, as quoted by the Bulgarian News Agency.

"People threaten that they will set their houses ablaze if they don't have the freedom to move without being photographed and IDed," writes the paper, commenting on the continued police presence in the area.

The technique for production of shale gas - called hydraulic fracturing or fracking - is known to be environmentally hazardous, especially for ground water, as it forces underground large quantities of undisclosed chemicals under exceptionally high pressure.

Chevron has the full permits required to explore for shale gas in at least two areas in Romania - one near Pungesti in the northeast, and one near Vama Veche in the southeast, close to the Bulgarian border.

The US company had applied to explore for shale gas on Bulgarian territory too, but in February 2012 the Bulgarian Parliament placed a moratorium on the technique.