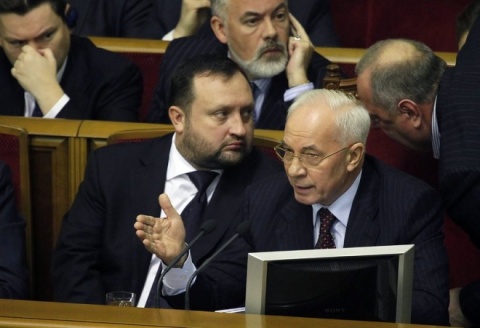 Ukraine's Verkhovna Rada (Parliament) has rejected the no-confidence vote against the government.

The no-confidence vote was scheduled on the opposition's request.

Ahead of the vote, opposition lawmakers banged their desks and cried "Out! Out! Out!" as Prime Minister Mykola Azarov defended the government's record and accused opponents of paralyzing its work by blocking its headquarters. He also condemned them for seizing a government and a trade-union building, the Wall Street Journal reported Tuesday.

The opposition fell short of the 226 votes required by law to pass the motion, securing 186 votes.

Before the vote, the opposition also grilled rulers about police brutality during the protests, prompting Azarov to apologize for the actions of Berkut, Ukraine's special riot police units, early Saturday morning, when they dispersed by extreme force pro-EU protesters in the capital Kiev.

Outside the parliament building, thousands of demonstrators continue to rally, waving EU and Ukrainian flags under the watch of riot police.

Rallies have been reported in Odessa, Lvov, and other cities.

Ukraine made the decision on the EU deal nearly two weeks ago, saying it could not afford to break ties with Moscow. Russia is trying to bring Kiev into its own customs union