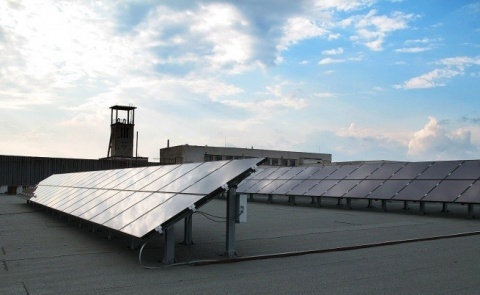 Bulgaria's Economy Ministry has defended a new tax on revenues of renewable energy producers, saying that the measure has been applied by other countries, including retroactively.

The proposal to introduce a new 20% tax on the revenues of photovoltaic plants and wind farms through changes to the Renewable Energy Sources Act was submitted by Volen Siderov, leader of nationalist party Ataka, during the second-reading vote on Budget 2014 by the parliamentary committee on budget and finance. On Saturday, representatives of the Bulgarian Socialist Party (BSP) and liberal party Movement for Rights and Freedoms (DPS) announced that they would back the measure in Parliament.

In a media statement issued Monday, the Ministry of Economy and Energy (MIET) cited the Czech Republic as an example, adding that the tax rate on preferential prices there amounted to 26-28%, while Greece had introduced a 30% tax.

MIET informed that Italy, Spain, Romania and the UK had also introduced measures to reform the support schemes for renewable energy.

"The proposal does not envisage a retroactive effect of the law. The tax will not apply to electricity purchased at preferential prices in a past period, and will only be levied on future purchases following the adoption of the law," the Ministry said.

The Ministry noted that the tax constituted work-related expenses, i.e. it would eventually reduce the corporate tax paid by renewable energy producers.

"Trade on the free market, electricity exports, and the energy generated to meet own needs are entirely exempt from the tax," MIET announced.

They said that the scope of the tax had been narrowed down to deals on the regulated market of electricity at preferential prices.

Citing guidelines of the European Commission, MIET noted that "preferential prices are applied for the purpose of maintaining low risk levels for investors in new technologies. With the development of technologies, they acquire a substantial share of the total output, so this type of protection is not necessary and must be terminated within a certain period."

The Ministry added that an EU Directive required Bulgaria to reach a 16% share of electricity produced from renewable energy and the country already boasted a 15% share.

MIET also argued that the tax would be a step towards overcoming the sharp discrepancies between prices of different producers operating on the regulated market, adding that it would also have a balancing impact on the electricity system.