Over 40% of Students in Bulgaria Study Law, Administration, Economics 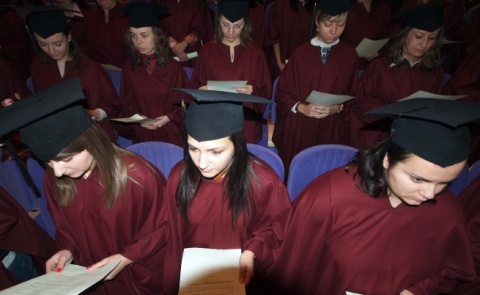 Nearly half of the students in Bulgaria are studying programs in the spheres of law, economics, and administration, according to a department head at the Education Ministry.

Maria Fartunova presented a draft strategy of the Education Ministry on the development of higher education by 2020, stressing that the final version of the paper was to be available by May 2014.

During the discussion, she pointed out that the number of students seeking degrees in physics, chemistry or machine building was minimal.

Fartunova, as cited by Darik radio, noted that the demographic collapse and the lack of a sufficient number of graduating students was a serious problem.

The expert drew attention to the alarmingly small number of young people seeking a career in research, adding that there were around 10 000 PhD students in the country.

The Ministry argued that entry into universities had to be facilitated, with control at the exit tightened.

Fartunova announced that the option of international experts conducting the accreditation of universities was being discussed.

She claimed that the way universities were managed had to change, as well as their funding model.

On Friday, the strategy for higher education was presented to the National Representation of Student Councils.

Anelia Klisarova, Bulgaria's Education Minister, made clear that the students had inquired about university mergers and demanded three-year BA programs instead of 4-year ones, a unified application system and early career orientation in schools.

The students insisted that the professional fulfillment of alumni and the quality of education had to be taken into account in the calculation of funding allocated to universities.