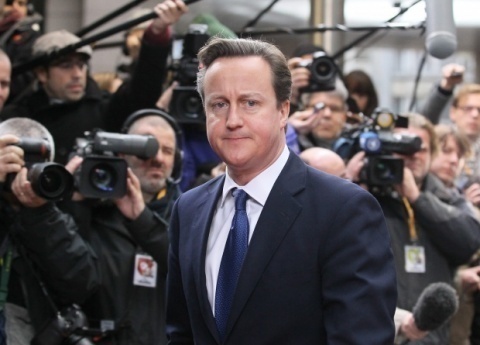 David Cameron will travel to eastern Europe on Thursday to urge EU leaders to put an end to the era of "vast migrations" from poor countries to the west, leaving behind a trail of criticism in his wake.

Brussels accused him of an "overreaction" and of making Britain look "nasty", while rightwingers in his Conservative party accused him of being too weak: they want him to ban Romanian and Bulgarian migrants from Britain until 2019.

Mr Cameron's call for a debate on migration came in a Financial Times article on Wednesday, as he sought to allay British concerns of a wave of migrants from Bulgaria and Romania when controls are lifted on January 1.

Along with proposed new curbs on access to benefits, Mr Cameron also proposed a wider review of free-movement rules, insisting that this most basic of EU rights should not be seen as "unqualified".

With an eye to future EU enlargements into the western Balkans and, perhaps, Turkey, Mr Cameron suggested rules to prevent an exodus of workers from new member states until their GDP per head reached a certain level.

Ministers admit Mr Cameron has yet to win public backing from leaders elsewhere in the EU for such a fundamental change, which he hopes to negotiate ahead of his proposed in/out referendum in 2017.

But he believes he will receive a good hearing from the European leaders gathered in the Lithuanian capital of Vilnius on Thursday to discuss the EU's relations with its eastern neighbours.

The announcement by Berlin of benefit curbs on migrant workers and by Paris of restrictions on temporary cross-border workers has encouraged the view in Downing St that Mr Cameron is working with the grain of European opinion.

With the threat of the UK Independence party looming, Mr Cameron will not mind a high-profile spat with “eurocrats” and it was noticeable that the European Commission did not immediately brand Britain’s benefit curbs illegal.

The prime minister insisted that “British people expect fairness” and said that his move to restrict access to benefits for migrants – backed by his pro-European Liberal Democrat coalition partners – was fully justified.

He said the message was going out to Romanians, Bulgarians and other EU nationals that they should not come to Britain thinking that it was easier to claim benefits.

But Mr Cameron’s plan to restrict benefits – including a three-month qualification period and a time limit of six months – was dubbed a “panic measure” by the Labour opposition.

Downing St admitted that the three-month rule for claiming benefits might not be in place before January 1, but said that other changes – including plans to deport beggars and rough sleepers – would be in force by that date.

Some Conservative MPs believe that Romanians and Bulgarians should be excluded from the British labour market for a further five years and have urged Mr Cameron to defy Brussels and accept an EU fine if necessary.

An estimated 121,000 EU nationals from outside the UK claim jobseekers allowance – according to official figures from August – and all must first pass a habitual residence test to prove that they have had a job and a rental lease.

The Department of Work and Pensions has no data about how long this typically takes, although it is usually a matter of weeks at least.

Labour claimed that the coalition had stolen its idea, first proposed in the spring by Yvette Cooper, shadow home secretary, to make this test tougher.

The commission has challenged the UK’s use of a “right to reside” test as an additional condition for entitlement to benefits.