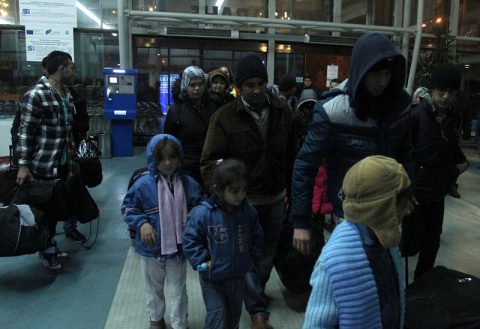 Iraqi families get ready to board a charter flight back home. Photo by BGNES

Bulgaria has extradited 46 Iraqi immigrants earlier on Wednesday with a charter flight from Sofia.

The operation is part of the Interior Ministry's strategy to deal with the refugee situation, reports Mediapool.bg.

All of the deported Iraqis have been refused refugee status in Bulgaria. Among them were families with children.

The Bulgarian government revealed its plans to deport around 200 immigrants per month. Other measures include placing asylum seekers in closed reception centers.

Deputy Interior Minister Vasil Marinov released information on Wednesday, saying that 11 072 persons have illegally crossed into Bulgaria from Turkey during 2013. His predictions are that the number of those entering will drastically drop over the following months.

The government is also controversially building a fence on its border with Turkey, which will most likely be completed in February.