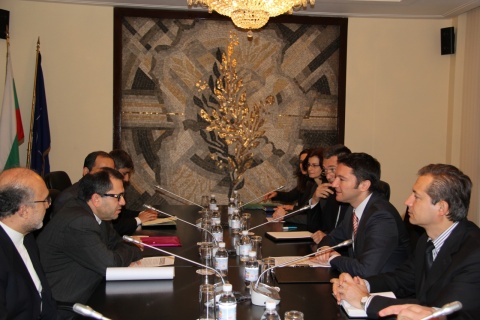 Photo by the Bulgarian Ministry of Foreign Affairs.

"We hope that a permanent and mutually acceptable solution to the issue will be found, which will give way for further utilizing the development potential of the Bulgarian-Iranian relations," stated the Bulgarian top diplomat.

On his part, Iran's Vice-FM Takht-Ravanchi noted that the agreement is beneficial to both Iran and the rest of the international community. "The only way to have a better world is for everyone to feel a winner. Fortunately, that is exactly what happened in Geneva," he said.

In his words, the new government in Tehran has sent a clear message that it is ready to pursue a policy of friendship, openness and striving for better understanding.

Vigenin and Takht-Ravanchi further discussed the development of bilateral relations and identified areas in which the cooperation and dialogue must be strengthened, such as trade, energy, culture and education.

They indicated the resumption of the regular political consultations between the foreign ministries of the two countries, the preparation for holding meetings of the Joint Committee for Economic, Scientific and Technical Cooperation and the Joint Committee on Tourism as possible future steps.

The two diplomats also exchanged views on the crisis in Syria in light of the forthcoming Geneva-2 international conference.