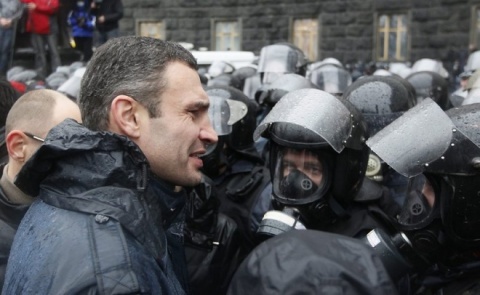 Former heavyweight boxing champion, and now opposition leader, Vitali Klitschko, has urged pro-EU protesters in Ukraine's capital Kiev to not give up.

Klitschko, who leads the opposition Ukrainian Democratic Alliance for Reform party (UDAR - Smash), has joined the demonstrators once again Tuesday morning telling them to keep fighting for the future of European Ukraine and to relentlessly pressure archenemy, President Viktor Yanukovych, to sign the association agreement with the EU.

"People, who are not afraid; who don't just sit around; who fight for their future; they are the only ones who can win. There is no victory without fight and we will prove that Ukraine belongs to Europe," said he.

Meanwhile, opposition leader Yulia Tymoshenko, who is in prison, announced she was beginning an indefinite hunger strike.

Several rallies in Kiev have been held over the last few days. Rallies have been reported also in the Black sea city of Odessa, in Lvov and other cities.

New clashes with riot police took place overnight, hours after Yanukovych said that the decision to not sign the association agreement with the EU was not taken lightly and urged the demonstrators to calm down.