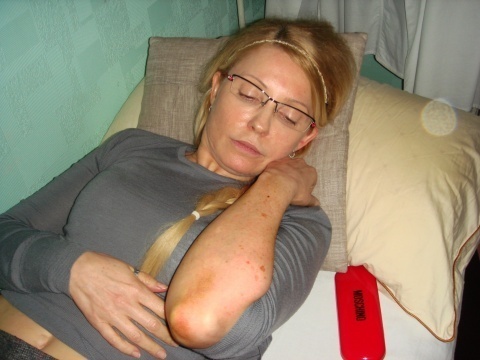 An undated file picture made available on 27 April 2012 shows Yulia Tymoshenko showing her bruises, from alleged beatings by prison guards, in Kachanivska prison in Kharkiv, Ukraine. Photo by EPA/BGNES

Ukraine’s jailed former PM Yulia Tymoshenko has launched a hunger strike after the government’s move to delay an association deal with the EU under pressure from Russia.

"As a sign of unity with you I declare an unlimited hunger strike with the demand to Yanukovich to sign the association agreement," the jailed opposition leader said in a message.

The message was read out to thousands of pro-Europe demonstrators rallying in Kiev by her defense lawyer, Serhiy Vlasenko.

Tens of thousands of Ukrainians rallied throughout the country on Monday in protest at a government decision to indefinitely postpone the signing of pivotal agreements with the European Union.

Media reports said that up to 100,000 people had gathered in the capital, Kiev, in rallies that lasted throughout the weekend in the largest demonstrations since the 2004-2005 Orange Revolution.

The Ukrainian government, facing mounting pressure from Russia, decided last week to put off the signing of long-discussed association and free-trade agreements with the EU. The signing would have taken place this week.

The government said it would instead seek closer cooperation with Russia and the Moscow-led Customs Union, which includes Belarus and Kazakhstan.