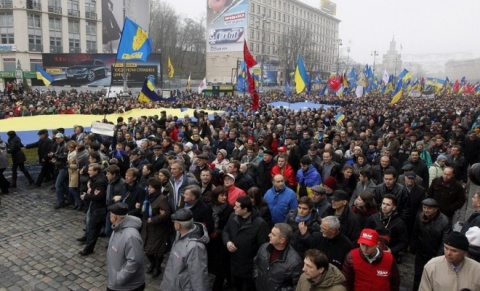 Pro-EU demonostrators have occupied the central square in the Ukrainian capital Kiev after the government announced it was putting on hold the country's associaion agreement with the EU, photo EPA/BNES

The European Union has voiced Monday strong criticism regarding Russia's position on Ukraine's association agreement with the Union.

"It is up to Ukraine to freely decide what kind of engagement they seek with the European Union. Ukrainian citizens have again shown these last few days that they fully understand and embrace the historic nature of the European association," they say in the statement, but stressed the association proposal was still on the table.

Several rallies in Kiev have been held over the last few days, but Sunday's has been the largest so far. Rallies have been reported also in the Black sea city of Odessa and other cities.

Fresh clashes between riot police and pro-EU protesters were reported Monday morning in Kiev as demonstrators tried to blockade the government headquarters.

Demonstrators remain on Maydan square, heavily guarded by police. The opposition urges signing the association agreement with the EU and sacking Prime Minister Mykola Azarov and his government.

The signing had been set for November 29 in the Lithuanian capital Vilnius.