Over 100,000 Rally in Kiev over EU Agreement Delay 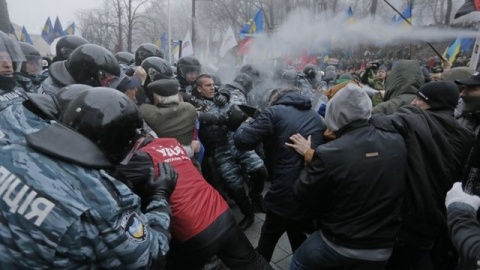 Protesters clashed with police outside the Cabinet of Ministers building. Photo by BBC

More than 100,000 people in the Ukrainian capital Kiev have protested against the government's move to delay an association deal with the EU under pressure from Russia.

Kiev police said they had fired tear gas after protesters threw a smoke grenade at officers in an attempt to break into the Cabinet of Ministers building.

Russian President Vladimir Putin accused the EU of blackmailing Ukraine to sign the deal during a summit in Lithuania next week.

People arrived at the rally, on European Square, with families and children, many holding banners with slogans like "I want to live in Europe" or "Ukraine is part of Europe".

"We want to be together with Europe," Volodymyr Mnikh, a 62-year-old retired chemist, told the Associated Press news agency.

"We want our children to have a future and not to be pressured by Russia."

World heavyweight boxing champion Vitali Klitschko, who leads the Udar movement, addressed the rally in Kiev saying Ukrainians would not tolerate what President Yanukovich had done to the country's prospects for integrating with the EU.

"We will fight in order for the association agreement to be signed," he said.