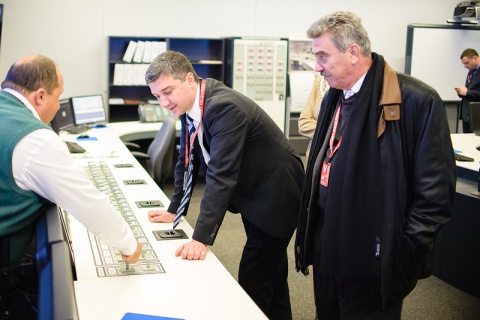 During a visit to the Westinghouse HQ in Pittsburgh, Stoynev was acquainted with the AP1000 design. Photo by EPA/BGNES

During a working visit to the US, Stoynev met with Daniel Roderick, Chief Executive Officer and President of the Westinghouse Electric Company, at the company's HQ in Pittsburgh, according to a media statement of the Ministry of Economy and Energy.

The meeting was also attended by Ivan Genov, Chief Executive of the Kozloduy NPP.

Stoynev was acquainted with the nuclear capacity currently being built under the AP1000 design in China and in the US state of Georgia.

He told journalists that it was important for Bulgaria to use the most up-to-date technology, adding that the safety and efficiency of the facility were of prime concern.

"Judging by what I saw, I believe the АР 1000 is a very good technology," he stated.

Westinghouse Electric Company, a pioneer in nuclear energy, is the only company in the world to apply the third-generation reactor design AP 1000 certified by the US Nuclear Regulatory Commission.

According to experts' estimations, the AP 1000 is the safest and most economical nuclear power plant available in the worldwide commercial marketplace.

Stoynev, as cited by the Bulgarian National Radio, made clear Thursday that the Belene NPP project was not on the agenda, reminding of the ongoing  arbitration proceedings at the the International Court of Arbitration in Paris between Bulgaria's National Electric Company (NEK) and Russian Atomstroyexport.

He cautioned that Bulgaria could stop being an exporter of electricity and start importing power supplies in 15 years, provided that no measures were taken.

He reminded that units of the Kozloduy NPP, as well as some other power plants, were to be closed in the 5-6 years to come.

"In 15 years, Bulgaria will have no more nuclear capacity. In 15 years, more than the half of our thermal power plants will be closed. What shall we do then? We cannot remain solely reliant on hydro power generation or renewable energy sources. Now is the time to start working on building new capacity," he added, as cited by BNR.