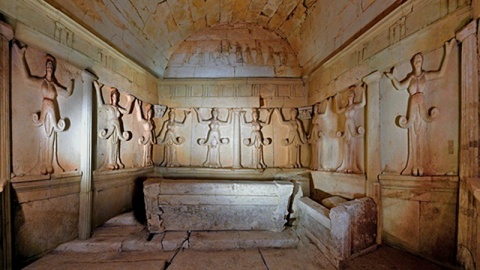 Interior of one of the most famous tombs at Sboryanovo/ Sveshtari. File photo.

Bulgarian archeologists working at the Sveshtari tomb have made new important findings suggesting the burial of a female Thracian cult leader.

The team, led by Prof. Diana Gergova, have discovered objects that they believe throw new light on the ancient Thracians' religious practices.

Located in north-eastern Bulgaria, Razgrad region, the Sveshtari site, also known as Sboryanovo, hosts a great many remains of the Getae, a Thracian tribe whose major city of Helis is also thought to have been located nearby.

The newly uncovered tomb is from the period of the 4-3th centuries BC.

"The tomb is coated in massive wood beams. It boasts an altar painted in black and red. What is more, it was bound to another facility shaped as a cut pyramid, which is a one of a kind finding," said Prof. Gergova.

The plethora of objects believed to hold magical significance - such as clay human figurines, cups with openings on their bottoms, and small axes - have led archaeologists to believe that the tomb might be that of a priestess.

"We also captured a very interesting ritual: we found several amphoras that were crushed and their fragments were built in the very tomb," added the team leader.

A number of gold, silver and bronze objects have also been recovered at the site.

In addition to the female burial, Prof. Gergova's team discovered several other burials in which the bodies of the deceased were burned.

At one of those, archaeologists again retreived many gold objects, as well as the skeleton of two horses - as Thracian noblemen were often buried with their important belongings.

"We also discovered a strange clay object, which was crushed as part of the burial rites, but can be judged as fascinating from its fragments. This is a unique finding that shows how many important things we don't know yet about the Getae," said Gergova.

Earlier this fall, Prof. Gergova had announced that her team made another important discovery - the fact that a living tree had been planted in one of the Sveshtari tombs.