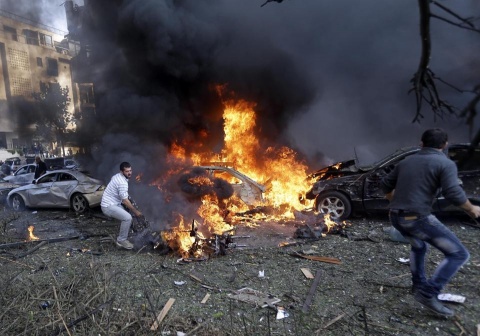 Men try to move bodies out of the burning surroundings in Beirut. Photo from news.yahoo.com

At least 7 people have been killed in the Lebanese capital Beirut in two large explosions, seemingly targeted at the Iranian embassy.

Local authorities have revealed that the Iranian Ambassador is safe, reports Al Jazeera.

The cause of the blasts is still unclear. Some witnesses claim 2 rockets were fired on the area, while a security source believes it was a car bomb. An embassy guard says one of the blasts was caused by a suicide bomber on a motorcycle.

The explosions were strong and caused damage to at least 5 buildings of the embassy compound and its surroundings.

No group has claimed responsibility for the attack so far. However, southern Beirut, where the Iranian embassy is located, is known as a Hezbollah stronghold.

Iran and Hezbollah are supporters of the Assad regime in Syria, and Sunni rebels have previously threatened to target his allies.