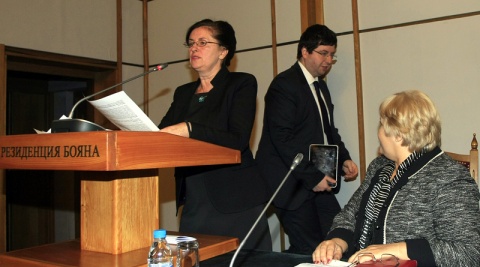 The proposal was presented Monday at a conference on the access of Bulgarian businesses to financial instruments offered by international financial institutions. Photo by BGNES

Bulgaria plans to provide businesses with access to interest-free loans for the implementation of EU projects, according to Deputy Prime Minister Daniela Bobeva.

The proposal was presented Monday at a conference on the access of Bulgarian businesses to financial instruments offered by international financial institutions.

Bilyan Balev, Executive Director of the Bulgarian Development Bank (BDB), explained that the loans were to be provided by the BDB for a certain period of time – two, three or five years, and the interests on them would be covered through the "Competitiveness" Operational Program.

Balev, as cited by mediapool.bg, noted that talks were underway with the Ministry of Economy and Energy for these loans.

According to statistics, a large part of the companies which win projects under the "Competitiveness" OP experience problems securing the co-financing, as a result of which  every fifth company gives up on the implementation of the scheme.

Balev also made clear that the Risk Investment Fund at the BDB would be re-launched with a capital of EUR 100 M which would subsequently grow by another EUR 100 M.

He reminded that the Risk Investment Fund at the BDB had been established through the Bulgarian Development Bank Act but its current capital amounted to zero leva.

"Our ambition is to launch this fund with a capital of EUR 100 M with the help of international financial donors," Balev declared.

He said that the focus of the BDB was shifting away from big projects to securing financial resources for small companies and startups.

Balev explained that they would be provided loans of up to EUR 50-100 000 with a fixed interest rate for the entire 5-year loan term.

He assured that the BDB would use different interest policies depending on the regions where the businesses were developing.

Balev also made clear that the strategy of the BDB also envisaged the creation of an export bank which would provide funding to companies seeking to implement projects abroad.