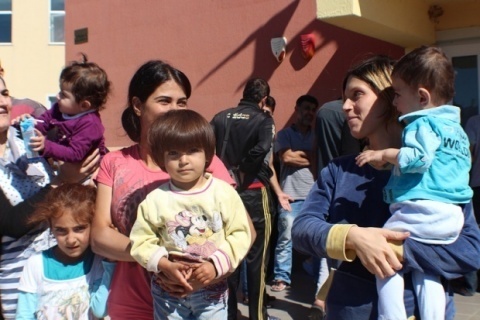 The number of refugees seeking shelter in Bulgaria has risen to 10 000. Photo by BGNES

Khaled stayed in Syria until the last possible moment. He had an important job to do, working with a clandestine network delivering aid to devastated Damascus neighborhoods. One by one, other members of the network had disappeared. Some were killed, others arrested, while many became so embittered by regime atrocities they decided to take up arms. When he was the last one left, Khaled — who requested that only his first name be published for fear that relatives still in Syria could face retribution from the government — decided it was too dangerous to stay. He set off for what he hoped would be peaceful sanctuary in Europe.

But in the six months since he left home, Europe has not been as kind to Khaled as he was to his fellow Syrians. After a difficult trek across the mountains from Turkey to Bulgaria, border guards detained the 32-year-old for illegal entry. After explaining his plight, he was shuttled between overcrowded holding centers for two months, eventually paying 0 in fees to lawyers and translators to get the government approval he needed to live outside the camps. Finally he has his liberty; now he fears for his safety.

On Nov. 3, Bulgarian skinheads took to the streets of the capital, Sofia, with a far-right faction giving the government an ultimatum to "clear the city from the criminal contingent of illegal immigrants in one week, or else we will do it ourselves," according to a translation by a human rights group.

A day later, two Bulgarian men allegedly stabbed and wounded a 17-year-old Syrian boy outside a school where some of the 8,000 refugees who have entered Bulgaria this year are housed in pitiful conditions. Police are still investigating the motive for the attack, but coming so soon after the far-right rally, the incident caused panic in the Syrian community.

Now Khaled is wary of leaving his Sofia hotel. "Everyone is afraid to say that they are Syrian, we all stay in our homes after 5 p.m.," he tells TIME. He has been warned by other members of the Syrian community: "Don't go to the center, don't even try to speak Arabic."

This is not the life that the Syrian refugees in Bulgaria imagined they would enjoy in Europe. "Refugees and asylum-seekers have fled horrible conflicts and persecution hoping for safety and understanding in Bulgaria,"says Boris Cheshirkov, spokesperson for the UN refugee agency, UNHCR. "But at the moment, many are struggling to have their basic needs met."

Government officials in Bulgaria — the poorest nation in the E.U. — say they are doing all they can to help the Syrians with the limited resources available. (The exact amount the state is spending on refugees remains unclear, with human rights officials saying some inaccurate reports in the press helped stoke hostility toward the Syrians.)  The interior minister, Tsvetlin Yovchev, has appealed for more help from the E.U, which has responded by pledging emergency funds.

"We should not expect a fast solution of the Syrian conflict," Yovchev said last month. "The refugee wave will continue for a relatively long period of time. The crisis might extend to other countries that are Syria's neighbors. Bulgaria and the EU are facing a critical situation. We can deal with it, but as a single country, there will be a point when all capacity will be exhausted."

Many of the two million Syrian refugees in camps in Turkey, Jordan and Lebanon realize that the conflict is highly unlikely to end soon and so they are thinking about building a life beyond a tent or trailer in the desert. Europe is the obvious destination and the numbers are going up: 34,205 Syrians applied for asylum in the bloc between July 2012 and June 2013, the Eurostat agency says. The number for all of 2011 was 7,886.

The challenges for European governments include providing housing for the refugees and dealing with health implications presented by the new arrivals. A report by the medical journal The Lancet last week warned that Europe risks a resurgence of polio imported from Syria. With anti-immigration parties predicted to do well at elections for the European Parliament in May, governments are also wary of policies seen as encouraging more migration.

For the Syrians, their dilemma rests on how big a risk they are willing to take to get to Europe. Many who applied for asylum in the past year are middle-class, but the next wave is likely to be made up of poorer, more vulnerable people without the money for a plane ticket to a European capital. About 7,500 Syrians have so far this year left Egypt and Libya in rickety boats heading across the Mediterranean to Malta or Italy, the EU border agency FRONTEX says. The dangers are huge: 330 asylum-seekers from Somalia and Eritrea drowned off the Italian coast in October.

For those in Turkish camps, Bulgaria is the safest option since Greece completed a heavily-guarded border fence last year in response to anti-immigration sentiment among a population struggling with the economic crisis. But many are surprised by the conditions they face in Bulgaria, where the government cannot provide them with food, clothes, or even enough beds. More than 11,000 asylum-seekers are expected in Bulgaria by the end of the year, up from 2,000 in 2012. Unprepared for the influx, the government has started opening up unused schools, including the communist-era Voenna Rampa woodworking academy, where 800 Syrians are crammed in to run-down classrooms.

Families put up sheets to forge some privacy. Some young men have decided that a blanket in the corridor offers more dignity than sharing a room with 40 other people packed tightly onto camp beds. There are no refrigeration units and few toilets, and some children wear face masks to guard against the stench of rotting food and urine. Broken glass litters the yard where they play.

Food, clothing and medicine are largely funded by donations from ordinary Bulgarians to the local Red Cross or directly to reception centres, where people have been turning up at the gates with bundles of clothes. But for all those who have helped, there are many who see the refugees as a threat to a nation with limited economic resources.

Protests have broken out in areas where the government plans to open new refugee housing facilities, stoked by stories in the news media accusing the refugees of being members of terrorist organizations. An alleged attack by an Algerian man on a Bulgarian woman last month provided the spark for the far-right rally, despite there being no link between the incident and the Syrian refugees.

"There has been a media-driven hysteria about the size and impact of the Syrian refugees coming into the country — it started with some misleading information on how much the government is spending on the accommodation," says Kamelia Dimitrova, a research fellow at the Center for the Study of Democracy in Sofia.

Since the beginning of the month, Amnesty International has recorded three attacks against migrants and refugees which they consider to be racially-motivated, and President Rosen Plevneliev and Prime Minister Plamen Oresharski have urged calm. "In recent days we have witnessed alarming incidents, criminal attacks linked with attempts to incite hatred and calls for refugees to be expelled," the joint statement by the Bulgarian leaders said. "Inciting of hatred and intolerance... are extremely dangerous and unacceptable acts that should be firmly condemned."

Many Syrians already in Bulgaria are eager to get papers officially identifying them as Syrians with humanitarian status, which will allow them to travel to other countries. They are hoping for a warmer welcome in richer nations like Sweden and Germany. "It's better than Syria but you see how we live here, it's a bad situation," says English student Mazen Mustafa, 23, as he casts a glance around the filthy corridor in Voenna Rampa. "No one will stay here."