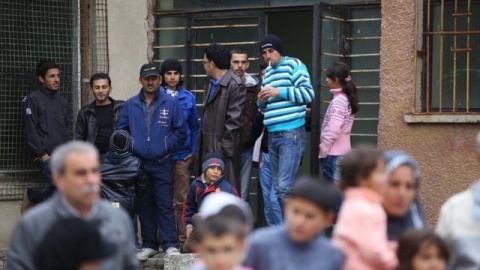 Illegal Immigrants in front of the building of the refugee shelter in Ovcha Kupel district in Sofia. Photo by bTV

Illegal Immigrants from Sofia’s biggest shelter staged a protest to demand faster processing of their asylum applications by the Bulgarian administration on Thursday.

Immigrants accommodated in the biggest Sofia refugee shelter in the district of Ovcha Kupel have refused to return to their rooms in the shelter in the evening of Thursday as a sign of protest against the slow processing of their asylum applications by the Bulgarian administration, informed bTV.

“We are protesting in order for the procedure of documents processing be accelerated, we demand at least our documents to be written in English language and we hoped that our asylum applications could be processed faster, but so far nothing has changed and we’ve had enough of this”, said one of the protesters in front of bTV.

In order to prevent tension rising policemen have arrived and have managed to convince the immigrants to cease their protest and they returned to their rooms in the shelter for the night, reported bTV. The Police forces did not use force.

Last week, Bulgaria's Interior Minister Tsvetlin Yovchev has announced that the Refugee Agency will have to decide on the statute of asylum applicants in 3 days term, not 6 months.

Yovchev noted that the shortened deadline for the statement of the Refugee Agency had been one of the measures aimed at coping with growing refugee numbers.