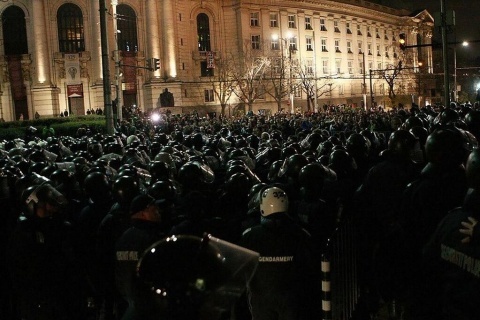 As many as five different major rallies have been called for the next few days as Bulgaria sees a resurgence of street protests.

Friday students who have occupied Sofia University are calling a rally in front of the Parliament nearby, at 11 am, when MPs will hold question time with cabinet members.

Tuesday students and other citizens clashed with police during a similar blockade of Parliament.

Students have taken up many of the slogans of summer anti-cabinet rallies and have requested the resignation of PM Plamen Oresharski and the dissolution of the legislative.

Bulgaria is plagued by a facade democracy and a persistent lack of integrity and morality, say the protesting young people.

Former rulers, center-right GERB, have called an anti-cabinet rally at 12 noon in second-largest city of Plovdiv.

GERB said they support students' requests, but the students have stated that they do not desire GERB's support, seeing the party as part of the problem.

On their part, current ruling coalition major partner, the Bulgarian Socialist Party, have called a rally at the same time Saturday in capital Sofia.

BSP representatives have described the event as a "national rally" and have expressed hopes that all citizens supportive of cabinet will join.

Some commentators have expressed fears of clashes Saturday, with the BSP rally facing off anti-cabinet activists, and a notorious Levski - CSKA football derby to take place later that afternoon.

It is expected that Monday will see another major rally to celebrate 24 years since the first major anti-government protest in modern Bulgaria, November 18, 1989.

The Confederation of Independent Trade Unions (KNSB) has called a national protest in the Bulgarian capital for Wednesday.

Monday, KNSB and other major trade union, Podkrepa, started talks about organizing a general strike, but the negotiations have fallen through.