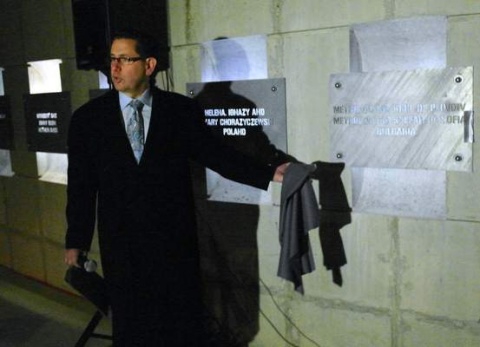 That Bulgaria’s Jewish population in World War II was saved from Hitler’s extermination camps could be considered a miracle, but it shouldn’t be.

Bulgaria was the only Eastern European country to end World War II with a larger Jewish population than when it began, not simply because a higher force intervened but because heroic individuals took action.

They stood up — did the right thing when it was most difficult to do so — and emerged as rare “upstanders” during horrific Nazi persecution when many more were bystanders.

The Illinois Holocaust Museum & Education Center Nov. 7 added two Bulgarians to its Ferro Fountain of the Righteous, which pays tribute to the few who risked their own well being to save others. Historians say that only one-half of one percent of the population in Eastern Europe during World War II qualified as rescuers.

“What we are poised to do over these next few minutes is among the most sacred and blessed and joyful ceremonies we conduct here on the grounds of the museum,” said Museum Executive Director Rick Hirschhaut. “Our Ferro Fountain of the Righteous is an anchor element of the teaching and the spirit and the message of this institution.”

It is not coincidence that the annual ceremony is held around the anniversary of Kristallnacht, the “Night of Broken Glass” when Jewish stores, businesses, homes and synagogues were destroyed Nov. 9, 1938 during orchestrated acts of violence in Germany. Holocaust historians have described Kristallnacht as “the end of the beginning and the beginning of the end.”

The museum has never shied away from looking at the horror of that night, which is also well represented in its permanent exhibition. But it also chooses to highlight those few rays of light that shone during such a dark time.

“This is a place where we recognize goodness,” Hirschhaut said about the Fountain of the Righteous. “When you think about the Holocaust Museum, the notion of goodness is not, perhaps, the first thought that comes to mind.”

Goodness, though, is the best way to describe rescuers Metropolitan Stephan and Metropolitan Kiril, both of whom were Heads of the Independent Orthodox Church in Bulgaria.

Stephan, head of the Sofian Church during World War II and the highest ranking church official during the Holocaust, spoke out against the persecution of Jews after the Bulgarian Parliament passed laws denying their rights. In September, 1942, he challenged Fascist and Nazi circles by openly preaching against anti-Semitism and advocating publicly that Bulgarians should declare Jews as their brothers.

Kiril, head of the church in Plovdiv in Bulgaria, also vigorously opposed Bulgaria’s anti-Semitic policies and worked against turning over Bulgarian Jews to the Germans.

In one instance, he tried to stop the deportation of Bulgarian Jews by threatening to spread out on the railway tracks. In another, he confronted a guard who was keeping rounded-up Jews at a school house.

“Where you go I will go,” he reportedly told the prisoners marked for deportation. “Where you lodge I will lodge. Your people shall be my people and your God my God.”

The results of what these religious leaders did are found not only in memories but in extraordinary numbers.

Bulgaria’s pre-war Jewish population of nearly 50,000 survived the Holocaust. No Bulgarian was lost to Hitler’s ghastly persecution of Jews, in large part because these two men confronted intolerance and inhumanity, Hirschhaut said.

It was a small gathering including several dignitaries that stood outside the Fountain of the Righteous on a cold late afternoon last week to hear and celebrate the heroes. Candles they held illuminated the dark Skokie sky as a new plaque was added to the Fountain wall.

Many of the 50 people or so in attendance were proud Bulgarians or those who have ties to the country.

In a stirring keynote speech, Elena Poptodorova, U.S. Ambassador Extraordinary and Plenipotentiary of Bulgaria, said this night was about reflecting on the basic virtues of what people bring to Earth.

In the wake of the Holocaust, she asked, what have we done since to make sure there is no repetition?

“Are we truly in our full role challengers of intolerance, (champions) of peace, of supporting non-violence and fighting violence and discrimination?” she asked.

Like many in attendance, she said she couldn’t have been “more grateful or proud or humbled” by the museum recognizing these Bulgarian heroes and the lives they saved.
Metropolitan Stephan and Metropolitan Kiril saved those lives more than 70 years ago.

One has been dead for more than a half-century, the other for more than 40 years.
And, yet, this ceremony wasn’t only about history from some dark time belonging to the recesses of World War II. The example they and others like them set is as relevant today as it was then, many speakers maintained.

“The forces of hate and intolerance still exist across the globe,” said U.S. Rep. Brad Schneider (D-10th). “These two courageous leaders saw the forces of hate mobilizing across Europe and even in their own backyards. Instead of standing idly by like a tragic number of people across the continent did, these two stood up, spoke out and directly saved lives.”

In some ways, that’s the most important lesson-by-example that the Illinois Holocaust Museum tries to deliver every day to young people who will shape tomorrow’s history.

“Nothing is more important that we do at the museum than to recognize individuals who stood up and made a difference and represented the best of humanity at a time when the worst of humanity was so profound,” Hirschhaut said.