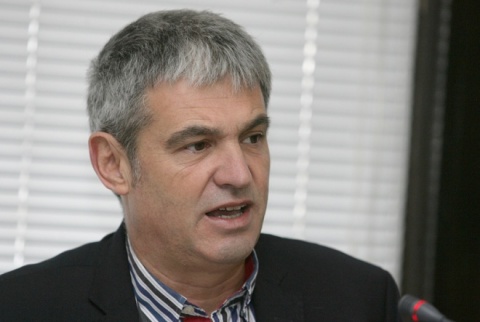 KNSB, one of the two major trade unions in Bulgaria, has scheduled a nationwide protest for November 20, it was announced on Wednesday.

KNSB leader Plamen Dimitrov has told reporters that the protest will be a warning sign for Bulgaria’s government, with workers expressing their concerns over the state budget for 2014 and the socio-economic situation in the country.

However, Bulgaria’s other large trade union, Podkrepa, has refused to take part in the protest actions.

Podkrepa has said in a statement that it refuses to partake in “the suspicious political and oligarchic wars that are going on.”

Wednesday marks the 153rd day of non-partisan anti-government rallies in Bulgaria.
The protests were triggered by the appointment of controversial media mogul Delyan Peevski as Chair of the State Agency for National security (DANS) in June – and were fueled by a number of other controversial appointments and wider concerns about corruption.

The rallies were given a fresh boost as students staged full and partial blockades at a number of universities in October.

Tensions escalated on Tuesday, as police cracked down on a massive anti-graft rally in Sofia.