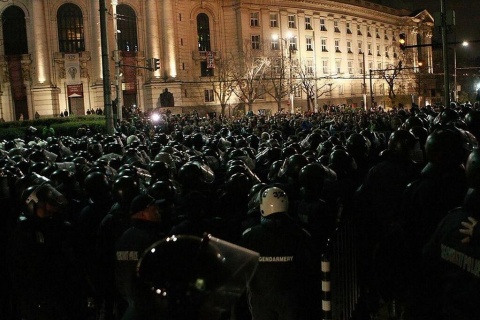 Bulgaria's capital Sofia remains a "war" zone Wednesday with close to the unprecedented in recent history 10 000 riot police and gendarmerie with shields, helmets, batons, and armored vehicles, deployed in its downtown.

As demonstrators begin to gather once again on the square in front of the Parliament, bTV reported that citizens, simply passing by, are subjected to security checks and are asked to show ID cards.

Someone has positioned on the iron wall, which is now guarding the Parliament, a huge sign saying "Bless You University Students."

One man has already been arrested for placing on the ground near the fences, not hurling, a carton full of eggs.

The Wednesday antigovernment rally, held for the 153rd day in a row, started at 10:30 am.

Another rally of university lecturers and students is scheduled for 2:30 pm and will be held at the Interior Ministry headquarters in protest against violent police actions against citizens exercising their constitutional rights.

On Tuesday, the protest turned very violent with demonstrators beaten and dragged on the ground by police. There are fears that this could escalate Wednesday amidst reports some people are being bused to Sofia by political opponent parties while others are traveling on their own in their cars to join the rally.

Tuesday evening, after ten hours of antigovernment protests in Sofia, with tensions and direct clashes between riot police and demonstrators, huge government reinforcement arrived around 9:30 pm, and violently pushed people with their shields and batons from the square in front of the Parliament.

The square was fully cleaned at 9:45 pm.

Some of the citizens raised their hands in sign they were asking for non-violence.

However, groups of provocateurs were also present, dressed in sweatshirts, with hoods on their heads, attacking the police with bottles and stones, and trying to provoke clashes.

Earlier Tuesday evening, the crowd managed to push down most of the metal fences guarding the Parliament, hurdled bottles, stones, eggs, firecrackers, and other objects at the building, set fire in the vicinity, and erected barricades from trash containers.