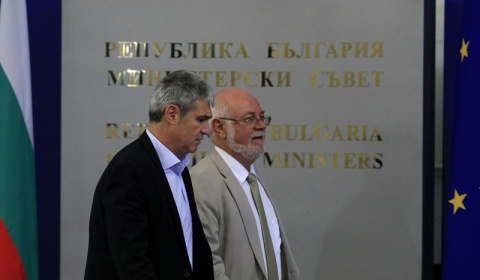 The joint actions are to be announced by the leaders of the two trade unions, Plamen Dimitrov (KNSB) and Konstantin Trenchev (Podkpera), on Wednesday. Photo by BGNES

Representatives of the Confederation of Independent Trade Unions in Bulgaria (CITUB) and the Podkrepa Labor Confederation have explained the step with the current social and economic situation in the country and the need for joint actions, according to reports of the Bulgarian National Radio (BNR).

The decision for the step was taken during Monday's Consultative Council of the two confederations and the joint actions are to be announced by their leaders, Plamen Dimitrov (KNSB) and Konstantin Trenchev (Podkpera), on Wednesday.

On November 1, the Day of National Enlighteners in Bulgaria, students involved in the anti-government protests called for a nationwide strike.

The estimate of the two trade unions at that point was that the time was not ripe for such a step.

They admitted, however, that things could change substantially very soon.

CITUB's press office, as cited by mediapool.bg, informed that the scenario of a nationwide strike was hardly likely, one of the reasons being the cumbersome procedure.