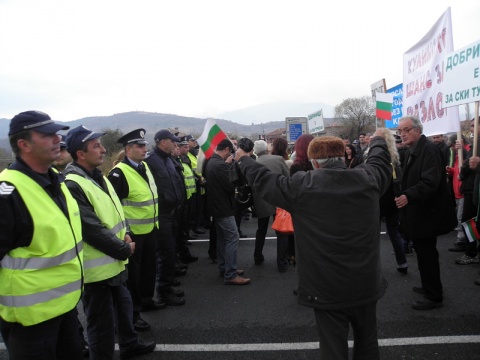 Residents of Bansko, Razlog and Dobrinishte stage a blockade of international road E 79 near small southwestern city of Simitli. Photo by BGNES

Residents of Bansko, Razlog and Dobrinishte southwestern resorts have staged a blockade of E 79 in support of a proposed construction of a new ski lift in Pirin National Park.

Around 1000 protesters from southwestern Bulgarian resorts Bansko, Razlog and Dobrinishte have blocked the international E-79 road near the small town of Simitli, informs BGNES.

They demand from the Bulgarian government to approve of a construction project of a new ski lift and new ski slopes in Pirin National Park, reports BGNES.

Local residents are strongly supporting the project and argue that such project would improve the region’s infrastructure and would make that the whole region more attractive to investors and tourists, but the government has yet to announce its final position.

Protesters are angry at the government for protracting its decision on the matter even though deputy PM Daniela Bobeva met with representatives of the tourist sector from Bansko, Razlog and Dobrinishte in September and stated that the government firmly supports the construction of a new ski lift.