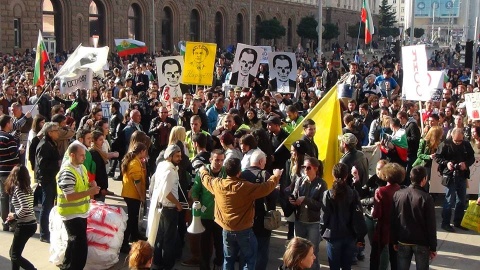 On Sunday thousands took the streets in the Bulgarian capital Sofia to condemn the "reign of oligarchy." Photo Facebook

Bulgarian students found the gates of Sofia University padlocked and chained shut on Monday morning after thousands marched in downtown Sofia on Sunday to complain that Bulgaria was still not stable, prosperous or well governed, exactly 24 years after the end of communist rule.

The complete blockade of Sofia University – it has been partially occupied for three weeks and now even staff can't access the building – is the latest step in a series of student protests calling for the government to resign.

They are not alone in their struggle. University professors and teachers issued a statement condemning the "lies and 'tycoonisation' of the political and social environment".

On Sunday, according to AFP, 4,000 took the streets to condemn the "reign of oligarchy," chanting "Resign," "Mafia" and "Shame on you" when they passed the Parliament. The demonstration, dubbed "March for Justice" by the protestors, is the 150th day of a wider movement of daily anti-government demonstrations.

One banner read "Your time is up! 24 years of false transition is enough", accusing all the governments since Communist dictator Todor Zhivkov was toppled on November 10, 1989, of failing to reform politics and lay the foundations for steady economic growth.

Other banners read "Down with the Mafia," "No to Oligarchy" and, addressed to the government "We stay, up to you to emigrate".

Some demonstrators carried posters of Bulgarian Prime Minister Plamen Oresharski with his facial features replaced by a skull.

Eighteen of the 51 Bulgarian universities affected

Lecture halls at Sofia University have been occupied since October 25, with several other universities and colleges joining the movement. Among them, the Bulgarian National Academy For Theatre and Film Arts, the New Bulgarian University, the University of National and World Economy, the Medical School and Plovdiv University, about 120km away from the capital.

In total, 18 of 51 Bulgaria's universities are now affected by the student movement, AFP reports.

On social media, the hashtags #Occupy272, in reference to the lecture hall that was first occupied, and #OccupySU have joined the traditional #ДАНСwithme hashtag used by protesters for more than four months.

The protests are supported by 60 percent of Bulgarians, according to a poll by independent pollster Alpha Research.

In an interview for the French magazine Le Nouvel Observateur, Bulgarian President Rosen Plevneliev renewed his support for the social movement. "Our institutions need transparency, because it is lacking (...) what we call Mafia is a pathology our democracy must eradicate", the president said. "If we hide this truth, not only will there not be healing, but we will allow the disease to spread. I remain optimistic because Bulgarian civil society has given a precise diagnosis and will lead us to its recovery."

The protests were originally sparked by the controversial appointment of businessman and MP Delyan Peevski as the new head of the State Agency for National Security last June. Public anger eventually led to his removal but the demonstrations have continued, albeit less intensely, amid calls for PM Oresharski and the Socialist-led government to resign.

More recent political and judicial scandals have fueled protests that had lost steam since the end of summer. Last week the deputy leader of the MRF party, a junior partner in the ruling coalition, quit shortly before prosecutors announced they were investigating him for tax fraud and money laundering. The politician, Hristo Biserov, has not commented on the allegations.

Bulgaria remains the EU's poorest member state. Membership has brought prosperity to many, but has also encouraged young people to emigrate, leaving behind a population growing ever older and poorer. At the same time, the failure to entrench strict rule of law and combat corruption has deterred the investment Bulgaria desperately needs.

The average monthly wage is the lowest in the EU at just 400 euros and the average pension just 130 euros. Since the end of Communism, the birth rate has fallen, the mortality rate has risen, and the population has plunged from 8.98 million in 1988 to 7.32 million in 2011.