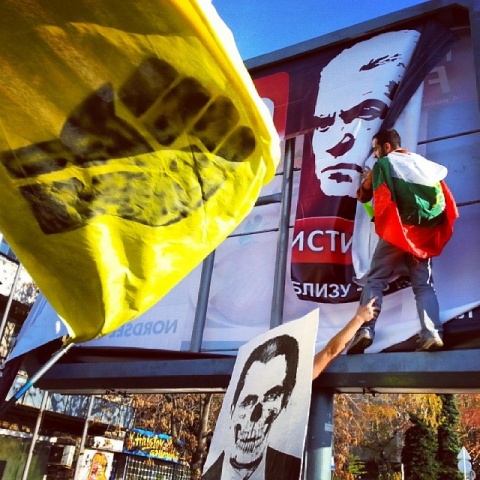 On Sunday, antigovernment protesters, who blocked both lanes of the main thoroughfare "Tsarigradsko Shosse" in the Bulgarian capital Sofia, burned a billboard with an image of nationalist leader Volen Siderov, photo Facebook

Bulgaria's extremist nationalist party Ataka is demanding the immediate resignation of the Chief of First Police Precinct in Sofia, Daniel Pashov, for inactivity during the Sunday protest rally.

In a declaration of the party, sent to the media, the nationalists say that as usual the Ministry of Interior and its employees from the precinct have been idle, tolerate crime in the capital and failed to retain offenders.

The demand stems from destruction of several Ataka and its TV Alfa advertisement billboards by anti-goverment protesters marching in the Bulgarian capital Sofia Sunday.

"Around 4 pm, protesters, who blocked both lanes of the main thoroughfare "Tsarigradsko Shosse," burned a billboard with an image of the leader of Ataka Volen Siderov. The police failed to intervene and there is no information about any arrests for destruction of private property," the declaration of Ataka reads.

According to them, their Alfa TV had footage from the incident and an eyewitness has identified among the "arsonists" blogger Asen Genov, who has been one of the most active participants in the anti-government demonstrations in Bulgaria and the "protest network" association that they established.

Therefore, the nationalists urge for Genov to be arrested "for criminal vandalism."

Commenting for the bTV news broadcast, Genov stated the nationalists' claim against him was "lies and slander," stressing he intended to seek his rights in Court. The blogger asked Ataka to immediately publish the video with the billboard burning. He insists he has been at another location at the time and had witnesses to prove this.

Genov and five right-wing activists were arrested around 5:00 am last Thursday, the day marking Red October and the Bolshevik seizure of state power in Russia, when spray-painting a memorial in front of the Socialist Party headquarters. They were all released by the evening without any charges pressed against them.