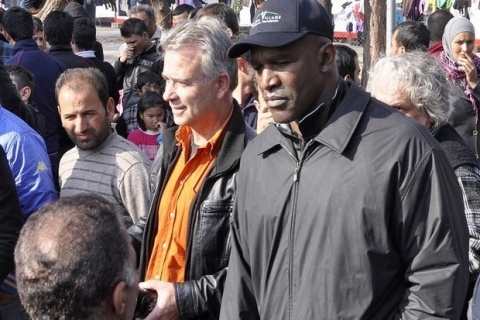 Four-time world boxing champion Evander Holyfield and billionaire Yank Barry have started a campaign for support of refugees in Bulgaria.

They have already rented a hotel in the outskirts of the capital Sofia, where Syrian families will be accommodated.

US-born, retired boxing champion Evander Holyfield and Canadian billionaire and philanthropist Yank Barry visited Sunday the refugee shelter and camp in the southern Bulgarian town of Harmanli with a delegation from Barry's Foundation that helps refugees.

While touring trailers and tents, they were besieged by the immigrants. Holyfield explained he grew up in a ghetto and wanted to set an example for other people how one can help in a difficult situation.

"I myself grew up in poverty and without the help of people I would not be who I am. When I was 8 years old, I was told that I will be the next Mohammed Ali, and the most important thing for me is that I achieved this with the help of others, so I am glad that I can help," said he.

However, after realizing that only two families will be moved from the camp to the hotel, the refugees became very upset.

"They are threating us like animals. We are not here for Bulgaria, we are here because of the European Union," stated some of them.

Barry, however, explained that Bulgaria cannot afford to do more, and the European Union was not granting sufficient funds. He promised to rent many more buildings to house refugees.

"Bulgaria did not create this situation, Bulgaria is trying to help, but it is a poor country. We're here because I have a sentiment for Bulgaria. During World War II the country rescued many Jews from concentration camps and I'm Jewish. I'm here to rescue refugees in Bulgaria with my own money," said Yank Barry.

Before saying goodbye to their guests, the refugees staged some sort of a protest rally, insisting they wanted to leave the camp in Harmanli ASAP. People from Barry's Foundation calmed them down and reassured them once again that more housing will be provided soon.