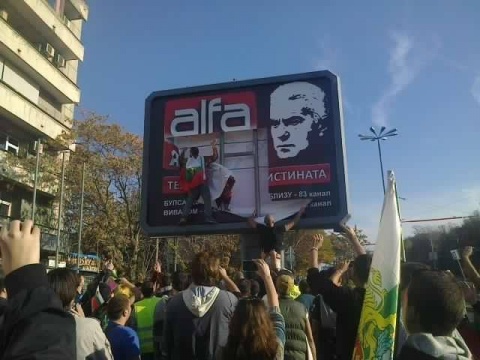 Sunday thousands of Bulgarians took to the streets of the country's main city in protest against the corruption and lack of morality in local politics, 24 years after the November 10, 1989 turnover from communism.

The rally is a culmination of June and July anti-cabinet protests, and an occupation started by students at Sofia University end of October.

Protesters have called for the resignation of embattled Bulgarian PM Plamen Oresharski, whose cabinet is supported by the Bulgarian Socialist Party and the liberal Movement for Rights and Freedoms.

But they were also vocal against Ataka, whose group in Parliament they see as vital for the cabinet's survival.

Ataka MPs have not backed by the Oresharski cabinet, but their presence for important plenary sittings has secured the parliamentary quorum.

At the same time, protesters expressed their outrage at a recent upsurge of xenophobia in Bulgaria, which has resulted in several attacks against immigrants.

Saturday, the anniversary of the 1938 Kristallnacht, was marred by the founding of a new, Nazi-like fringe party in Bulgaria.