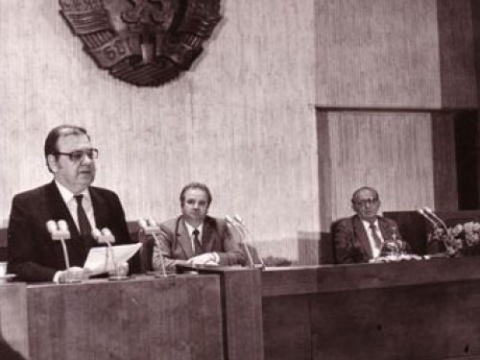 This historic photograph from the November 10, 1989 plenum of the Bulgarian Communist Party shows Petar Mladenov (L) taking over from Todor Zhivkov (R back).

Bulgarians mark on November 10 the 24th anniversary of the overthrow of the communist regime amidst 150 days of protests against the Socialist-led government.

However, as the country remains politically divided, there are no festivities on the backdrop of a general lack of enthusiasm that people from the other former Warsaw Pact countries would find hard to understand.

The November 10, 1989 internal coup in the Bulgarian Communist Party led to the ousting of long-time dictator Todor Zhivkov, and the crumbling of the communist regime, but failed to pave the way for reforms instituting democracy and market economy.

Bulgarians have shown a tendency to idealize the past, picturing the 33-year rule of the communist dictator Todor Zhivkov as a golden era when thrown against the background of crime and corruption that followed afterwards.

At the same time there is a very strong notion of November 10 coup not as a democratic act, but as a deliberate plot, engineered by the communists so that they can retain their power. Bulgarian dissidents, regardless of how small their number and divided their ranks, have been created by the State Security and implanted in society, the allegation goes.

Despite an investigation on charges such as embezzlement of state funds, Bulgaria's former communist dictator Todor Zhivkov died on August 5, 1998, without being sentenced. After 1990, he was kept under house arrest.

In the 22 years after 1989, Bulgaria has had one Grand National Assembly, six regular Parliaments, and has been governed by 12 Prime Ministers.

Following is a timeline of the rise and fall of the communist regime in Bulgaria:

After the coup d'etat the night of September 9, 1944, by the "Fatherland Front" subsequently dominated by the Bulgarian Communist Party, which occurred hours after the Soviet Army entered Bulgarian territory, and cracking down on the opposition and dissenters in the years 1944-1948, Bulgaria became part of the Soviet Union Bloc in Eastern Europe.

Bulgaria's long-time communist dictator Todor Zhivkov became First Secretary of the Bulgarian Communist Party in 1954, which was then the second top position at the Party; 2 years later, he became the head of the party as the higher-ranking post of Secretary-General was abolished. This made Zhivkov the de facto ruler of Bulgaria.

In 1962-1971, he was also the Prime Minister of Bulgaria, and in 1971-1989, he was the Chairman of the State Council – a de facto president in a modified presidential republic regime.

The process of change in the Soviet Bloc states in Eastern Europe began with the policies of perestroika initiated by Soviet leader Mikhail Gorbachev after 1985. In 1988-1989, the first opposition and dissident protests are organized in the Bulgarian society by groups around Zhelyu Zhelev and the Club for Support for Glasnost and Perestroika.

On November 10, 1989, several hours after the fall of the Berlin Wall, the Central Committee of the Bulgarian Communist Party holds a meeting in which Zhivkov is forced to resign as party head and head of state.

As a result of the intra-party coup, which is widely seen as a move on the more energetic part of the BCP leadership to come ahead of the emerging oppositionand to retain the power within the Communist Party, Mladenov was confirmed as the new BCP Chair.

On November 17, he was also elected as Chair of the State Council of the People's Republic of Bulgaria by the Parliament, which also removes from the Penal Code the texts incriminating criticism of the government.

On November 18, the first informal opposition organizations, Labor Confederation "Podkrepa" ("Support") and "Ecoglasnost" organized the first free demonstration in Bulgaria since the 1930s on the Alexander Nevsky Square in Sofia.

On December 7, 1989, a coalition of newly-formed and restored parties and organizations form the major opposition democratic bloc known as the Union of Democratic Forces (UDF).

On December 11-13, 1989, the Central Committee of the Bulgarian Communist Party adopted a course in favor of parliamentary democracy, and proposed the abolition of Article 1 of the 1971 Constitution (known also as "Zhivkov'sConstitution") which stipulated the "leading role" and monopoly of the BCP on political power in Bulgaria.

These changes were adopted by the Parliament only on January 15, 1990. The so called "Round Table" including representatives of the BCP and the opposition UDF, which paves the way for Bulgaria's peaceful transition to democracy andmarket economy, holds meetings from January 16 until May 15, 1990.

On December 29, 1989, the Politburo of the Bulgarian Communist Party decided to restore the Arabic-Muslim names of the ethnic Bulgarian Muslims and Bulgarian Turks, effectively reversing the so called "Revival Process" (or "Regeneration Process") instituted by the Zhivkov regime in the previous years in order to speed up their assimilation.

On January 29, 1990, Zhivkov was arrested on charges related to the forcible renaming and exodus of Bulgarian Turks and Muslims.

On April 3, 1990, the Parliament (National Assembly) elected Petar MladenovPresident of the Republic of Bulgaria.

The first democratic elections in Bulgaria after the 1930s were held on June 10 and June 17, 1990 – the elections for a Grand National Assembly, which was convened to discuss and adopt a new Constitution.

The results of the elections were disputed by the UDF, which started street protests, leading to the resignation of Petar Mladenov as President, including over a quote that he is believed to have said at the time, "It would be better if the tanks came out", i.e. in order to suppress the protesters.

Under the new Constitution, which provided for a parliamentary republic and limited powers of the President, Zhelev was elected democratically as the President in the elections on January 12 and January 19, 1992.