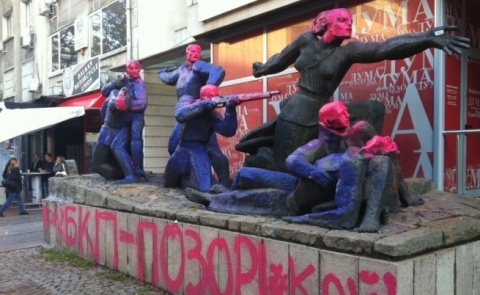 On Thursday Bulgarian activists painted a Communist-era memorial with purple and pink in sign of antigovernment protest, photo BGNES

All six Bulgarian activists who were arrested for painting a memorial in front of the Socialist Party headquarters in Sofia have been released.

The last two, a female protester and the widely-read blogger Asen Genov, walked out of the police precinct around 7 pm Thursday evening.

Genov said said he was questioned and fully cooperated with the authorities. He declined to offer details on grounds he did not want to impede the ongoing investigation in the case.

The other four detainees were released from custody earlier in the day. No charges will be pressed against them and no sanctions or fines will be imposed.

The six were arrested around 5:00 Thursday morning, the day marking Red October and the Bolshevik seizure of state power in Russia, when spray-painting the memorial in front of the Socialist Party headquarters.