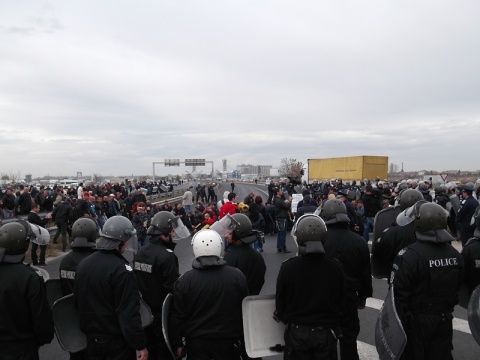 Police forces block the Trakia Highway, where stockbreeders were staging their protest march. Photo by BGNES

The highway blockade of the Bulgarian livestock breeders was temporarily stopped by the police, and one man was arrested.

The stockbreeders began their protest blockade from the Trud village near Plovdiv, and followed with a march to the capital Sofia, to demand the remaining amount of their government subsidies.

Around the 133rd kilometer of the Trakia Highway, police forces pulled aside the column of cars involved in the march. One man, who resisted the attempts of the authorities to break up the march was arrested.

The son of the arrested stockbreeder complained that the policemen had acted arrogantly and insultingly towards his father.

By October 20, the stockbreeders were to obtain 70% of the subsidies and by the end of January the remaining amount, but as of the moment, they have received about 40% of the money.

Grain producers who insist on BGN 230 M in subsidies are also preparing for protests and threaten to block roads.