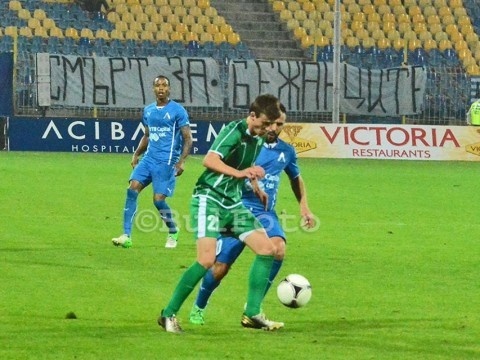 "Death to the refugees," one of the banners said. Photo by BulFoto

Bulgarian football giants Levski Sofia are to pay a mere BGN 3000 (EUR 1500) in fine for the shocking banners displayed by some of its fans during a top division game.

“Death to the refugees” and “Blood will be spilled over our lands”, two banners said during Levski’s home game against Pirin Gotse Delchev on Sunday.

The xenophobic display came a day after an Algerian immigrant allegedly stabbed a 20-year-old shopkeeper in Sofia.

A Bulgarian Football Union official has told news website Dnevnik.bg that the lenient fine was due to the fact that Levski had already been fined earlier this season, when some of its fans displayed neo-Nazi symbols and “congratulated” Adolf Hitler on his birthday during a game.

Last year, Levski  were fined EUR 30 000 by UEFA when fans raised banners during a home game against FK Sarajevo in the Europa League, targeting their insults at Bosnians on the subject of the Bosnian war in the 90s.