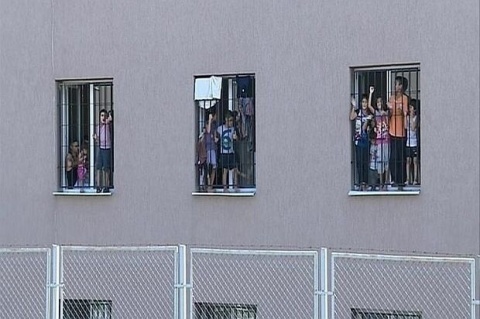 A photo of BGNES shows a typical Bulgarian refugee shelter, this one in the Sofia "Ovcha Kupel" district. f

As refugees flock to the country, aid agencies warn other European nations to be better prepared.

This is not the Europe that Bangeen imagined. Crammed in a disused carpentry school on the outskirts of Sofia, the 32-year-old Syrian Kurd has fashioned a tent from a white sheet and a tree branch. It is enough to grant his family some privacy from the dozens of people sleeping in the classroom, but it cannot guard against the smell that seeps in from the corridor. Syrian refugees work around the clock sweeping floors, scrubbing bathrooms and laundering clothes. Their efforts, however, are futile given the sheer numbers arriving.

Bangeen's children cannot avoid the filth and broken glass littering the floor. When their clothes are washed, they will hang to dry in a corridor which no amount of cleaning will rid of the smell of urine and souring food. Some children wear face masks, another attempt by their parents to protect them from sickness and harm, the motive which brought them to Bulgaria in the first place.

To some extent they have succeeded: in Bulgaria they are safe from snipers, bombs and tanks. But a pitiful existence in the European Union's poorest nation – which cannot provide clothes, food, medicine or even enough beds – is not why they risked their lives crossing mountains.

"They put us here and there is no money," says Bangeen, who worked as a driver in Syria before fleeing first to Turkey, then into Bulgaria with his wife and three young children. "All the kids are sick. There is a lot of dust. It is dirty, and there are 10 families in a room."

Bangeen and many other refugees in Bulgaria carry a message for Europe's leaders, who have put off discussing an overhaul of the bloc's asylum policy until next June and are quietly hoping that the two million Syrian refugees will stay in Turkey, Jordan and Lebanon.

But the evidence in Bulgaria suggests otherwise. As Syria's war shows no sign of ending, people want a more permanent home than a tent in the desert. Nearly 8,000 men, women and children have arrived in Bulgaria so far this year – up from 2,000 last year. And they are not planning on building their lives here.

"No way, no one will stay here," says 23-year-old English language student Mazen Mustafa, who is aiming for Germany or Austria. "You see the situation here. It is too bad. If we get our travel documents, we will leave this country."

Voenna Rampa School was not meant to house the 800 people living here today. It was a communist-era woodwork academy and was closed decades ago. But Bulgaria has the facilities to house only 5,000 asylum-seekers nationwide, so when Sofia's Migrant Reception Centre and other official sites filled up, they looked elsewhere.

There was hardly any time to repair the derelict building before the Syrians moved in. For the first few weeks, there was no hot water. That has been fixed, but no one has yet cleared the shattered glass from the yard where children play, or repaired the broken windows. There are only a few toilets for the hundreds of residents, and stomach bugs spread quickly.

Under EU law, member states must guarantee "a dignified standard of living" to people seeking refuge. It does not specify what constitutes such a life, but sleeping in rows of camp beds in a room with up to 50 other people does not appear to offer much dignity. Women from conservative Muslim families share a room with men they are not related to; some people sleep on blankets on the hard corridor floor.

"It is not meant to be a camp. This is not a hotel – it is a school," says camp commander Pepy Dzurenov. He lists overcrowding, unreliable food supplies and rudimentary health care as the main problems. But help is hard to come by. "Everything here is about the money."

Bulgaria simply does not have the capacity to look after its new guests. It cannot even feed them. All food and clothing are provided by the Red Cross and other charities, which are relying on donations from ordinary Bulgarians, philanthropic business people and the local Muslim community. Lack of medicine and doctors is a big problem. Many of the refugees are arriving with long?term illness, or injuries sustained in the war.

Ahmad Maruan Sahed, 23, was shot by a sniper near his home in a Palestinian refugee camp in Syria. The bullet shattered his hip, and his mother sent him to Europe with medical records and a doctor's recommendations that he undergo surgery to correct his heavy limp. There is no one to look at those papers at the Sofia Reception Centre, where he sleeps on a folding camp bed in a room with eight other men. He borrowed money to buy the medication he needs for the pain and his high blood pressure, but that will run out soon. Bulgaria cannot help him, so he appeals to the EU. "Take me to another country to get medical attention," he said. "Have some humanity."

Calls for more humanity from EU governments reached a peak last month, when 330 Somalis and Eritreans drowned off the coast of Italy while trying to reach Europe. A week later, dozens of Syrians died in a similar shipwreck between Malta and Italy. Human rights groups want the EU to provide more legitimate ways for asylum-seekers to reach safe havens without risking their lives.

But with anti-immigrant parties expected to do well in European Parliament elections in May, there is little appetite for such a debate. Governments are instead reinforcing their borders. One reason Syrians are flooding into Bulgaria at a rate of up to 100 a day is because Greece last year completed a fence along much of its border with Turkey. Bulgaria is doing the same soon. This means Syrians fleeing war will have to find another route into Europe, most likely on the dangerous sea passage.

Bulgaria has now joined Malta and Italy in asking for more EU money for the refugees, whose numbers are expected to swell to at least 11,000 by the end of the year. An EU official said emergency funds and logistical support would be made available, but added: "It is for them to fulfil their international and EU obligations on asylum."

Iliana Savova, a director at the Bulgaria Helsinki Committee human rights group, says the Bulgarian government should have foreseen the influx and been better prepared. She cautions the rest of Europe against making the same mistake.

"The neighbouring countries are hosting such a big population of Syrian refugees in such big camps," she says. "You can't live a normal life in a camp, [so] it's no wonder that even if 10 per cent of this population starts to move towards Europe, you have very big numbers."

Once the men and women get their refugee status, some will try to forge a life in Bulgaria. But with youth unemployment at nearly 30 per cent, the chance of a bright future is slim. "If this country is not providing the conditions, do expect them to come to your places," Ms Savova says. "I'm sorry, but that's the reality."