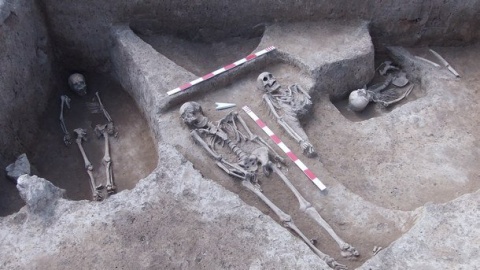 A necropolis with 376 graves from different historical periods was unearthed near the town of Marten in northern Bulgaria.

Experts have already established that eight of the graves were dug by the Thracians; others date from the early Roman Empire and the 4th – 6th century AD. Dug-outs from the time of the First Bulgarian Kingdom with plenty of pottery have been found as well.

One of the most interesting findings, according to archaeologist Dean Dragoev, is a grave built for a little girl with masonry of bricks and tiles.

In it, archaeologists found many small, yet interesting jewelry, some made of precious metal - two gold earrings, a bone needle plated with gold and an incredibly beautiful amulet made of red glass with some anthropomorphic and still unknown deity in it.

The girl, who was buried there, had in her hand a key ring, presumably for a coffer, which was likely stolen in the 13th century by treasure hunters.

Archaeologists in Bulgaria's Danube city of Ruse are continuing to analyze the findings. All of them will be included in the exhibit of the Ruse History Museum