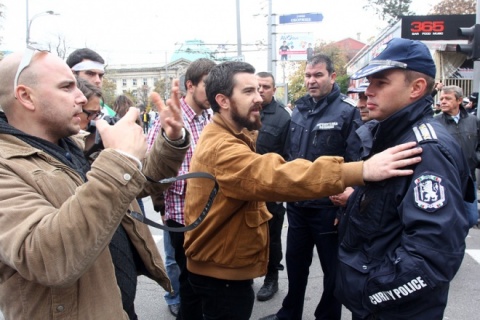 Policemen had to form a human chain to push the protestors out and bring traffic back to normal. Photo by BGNES

Clashes between protesting students and police erupted in Sofia on Friday afternoon at an anti-government rally.

The young people blocked street intersections in downtown Sofia, letting only ambulances through their fence of bodies.

Policemen had to form a human chain to push the protestors out and bring traffic back to normal.

Earlier in the afternoon, police did not allow people to block the intersection of "Dondukov" and "Vassil Levski" boulevards and pushed them by force to the sidewalks. This prompted the demonstrators to start shouting "mafia" and the name of Interior Minister, Tsvetlin Yovchev.

The latest unrest in the Bulgarian capital started after scores of citizens responded to the call of university lecturers to come at 11 am Friday at Sofia University to join their anti-government protest.