Bulgaria - Students on the Barricades 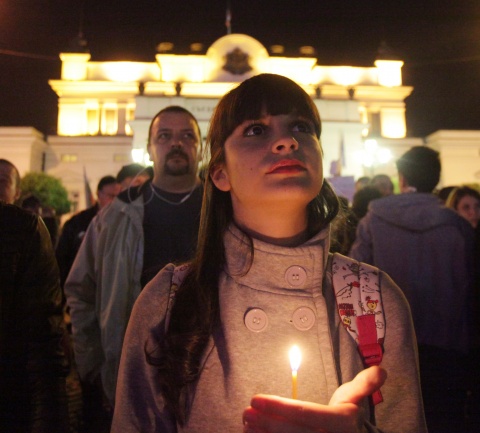 For several hours on October 30th, Bulgaria’s Constitutional Court, the highest judiciary body in the country, was being auctioned on eBay. Before the site took it down, the unusual item was described as “not functioning as intended and not fully operational”.  According to the ad, the item would be most useful for mafia members, kingpins or corrupted members of parliament.

The eBay stunt happened a week after students occupied the main building of the University of Sofia demanding the resignation of the Socialist-dominated government and an end to perceived corruption in politics. The open-ended sit-ins have since engulfed alma maters across the Balkan country, from the Burgas University on the Black Sea coast to the university in Ruse on the border of the Danube river with Romania.

The wave of student protest began in Sofia on October 23rd with the occupation of a hall where the chairman of the constitutional court, Dimitar Tokushev, was giving a lecture. The court is seen as too close to the government. Its decision in early October to allow Delyan Peevski, a controversial media mogul, to keep his seat in parliament has fuelled the anger of many Bulgarians who have staged daily protests since Mr Peevski was appointed as head of the powerful state agency for national security in mid-June.

Though the appointment of Mr Peevski was quickly reversed by parliament under the pressure of protesters, the anti-government demonstrators continued to rally against the alleged close links between politicians and business figures as well as the impunity and corruption among those in power.

After more than 140 days of demonstrations protesters seem to have lost some of their initial energy. Yet the student’s actions may yet give them fresh impetus to continue, observers say. “All students - and all citizens, I would say - want more government transparency and total exposure of what is happening behind the scenes,” says Nikolay Antov, multimedia and computer graphics student at the New Bulgarian University in Sofia. He is protesting since the very beginning of the occupation and says that “we will continue until the resignation of the mafia and oligarchy representation.”

Politicians in the governing coalition were quick to denounce the occupation and to accuse the students of being politically motivated. “This has nothing to do with democracy,” said Yanaki Stoilov, a high-ranking Socialist member of parliament. Since the beginning of the sit-ins, students have denied links to political parties.

For Daniel Smilov, political analyst and professor of political theory at the University of Sofia, the students protest is neither left nor right leaning.  “Everything revolves around the moral issues arising from the appointment of the Delyan Peevski and the elucidation of the close ties between government and corporate groups,” Mr Smilov said. "This is the essence of the protest and qualifying it as left or right is a secondary issue. Students are very well aware of the deep moral problem whose solution is one: resignation and new elections."

Beyond verbal accusations from politicians, however, students were also faced with a possible confrontation with pro-government demonstrators who unsuccessfully tried on Sunday to storm the gates of the university building occupied by the students.

While the university administration backed the motives of the students as a reaction to the “lack of morality in the political life,” it has urged them to lift the blockade. Still, over 400 professors from several Bulgarian universities have signed a declaration supporting the students.

One of them, Nelly Ognyanova, media law professor at Sofia university, says that the students protest to protect basic democratic values.  “We're together in the effort to bring back the meaning of our political community here and now,” Ms Ognyanova says. “We do not know whether the students will succeed in this, but we know that it is worth to stand behind them and to express our solidarity with the cause of democracy.”