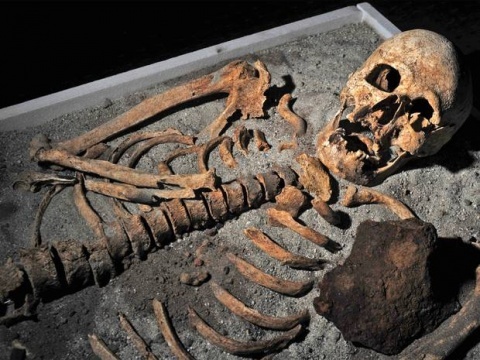 The skeleton of a man at Sozopol in Bulgaria, with an iron stake driven through his chest. Photo by Getty Images

Nikolai Ovcharov is a little dismissive of Count Dracula. The infamous bloodsucker was “a very fierce tyrant,” the Bulgarian archaeologist concedes, but his alleged lair in the Romanian town of Bran is “the smallest castle I have ever seen.” He doubts the inspiration for Bram Stoker’s character even spent the night. It is, he says, “a little bit of lies, a little bit of truth, a little bit of sensation.”

Dracula, it seems, has competition: his name is Krivich, he is a 14th century aristocratic pirate, and since the discovery of his skeleton with a iron spike through his chest near Bulgaria’s Black Sea town of Sozopol last year, vampire hysteria has descended on Bulgaria.

Tourist visits to Sozopol’s archaeological museum have tripled since the discovery. A Japanese film crew is the latest to make the trek to the coast for a documentary on the ghoulish find.

Bulgaria’s archaeologists are a bit bewildered by the attention. Vampire mythology is nothing new to the country: since the advent of Christianity in the 10th century, burial rituals have involved mutilation of some corpses to prevent them rising again to prey on the innocent. Now the archaeologists are puzzling over exactly what cocktail of truth, lies and sensation is appropriate to lure the tourists without compromising their scientific integrity.

“We should use everything that is interesting and sensational: historical fact, legends, myths,” says Ovcharov, a professor at the Bulgarian Academy of Sciences and a vampire expert. But he adds: “I’m afraid at the moment of vulgarization and diverting from the real explanation of these rituals.”

Krivich is not Bulgaria’s only outcast with a stake through his chest. More than 100 such sites have been uncovered across Bulgaria, and the practice continued well into the past century. Burial rituals aimed at keeping the dead firmly in the ground were performed on anyone who died an unnatural death or lived a lawless life. They ranged from pirates and other criminals to suicides, children who died before they were christened and people who lived to an unnaturally old age.

Ovcharov has documented more than 20 rituals deviating from the traditional Christian burial. One body had metal rings on its arms and legs pinning the skeleton down. Others have heavy stones on the grave, while many have their hands bound. “The families are responsible to stop the vampire transformation of the dead body,” he explains. “These people believe that between the first and fourth day after the death, the human soul is not in paradise or hell, it stays between sky and earth and it is in danger from evil powers.”

Ovcharov is not adverse to sensationalism. He relishes his reputation as a maverick of the archaeological world, boasting that he has “a big collection of hats — much more than the original Indiana Jones.” But there is one measure he insists upon: once anthropological investigations are finished, all the vampire graves his team unearths must be given a second funeral and reburied.

This had brought him into conflict with Bulgaria’s other famous vampire expert, Bozhidar Dimitrov, head of the Bulgarian National History Museum. It was his team who uncovered Krivich, and the bones have been excavated and put on display at the Sozopol Archaeological Museum. His presence has boosted the museum’s profits by up to 300%.

Interest does not, however, appear to be dying down, and Bulgaria could definitely do with any tourist dollars the graves may attract. It is the poorest nation in the European Union, with more than a quarter of its young people out of work. The government is trying to promote tourism to boost the economy, and it seems to be working. Tourist numbers have been rising each year since 2009, and so far this year they are up nearly 6% on the same period in 2012.

Despite Ovcharov’s skepticism about Count Dracula, Transylvania-based tourism consultant Gavin Bell says Bulgaria should take some tips from Romania on luring tourists with the myths. “It brings in the literary types, it brings in the Goths and the vampire fans,” says Bell, who also runs a tour company, Discover Carpathia.

Even if the bones are reburied, replicas can be created and sites developed in which history and culture is told through interactive displays and interactions with the local community.

“You do it with real communities and not in staged, folklore ways,” says Bell. “That way you bring in real money to rural economies, and not just to a few tour operators and a few places like a museum and the guys doing the kitsch stuff.”

There is always place for the kitsch, however, and Ovcharov is warming to the idea of a museum. If he had the funds, he would like to replicate U.S. museums he has visited like the Lincoln Memorial, which combine multimedia and artifacts. But if the worst comes to the worst, he says, “we should put some records of screams and artificial blood … how else are we going to present the vampires?”