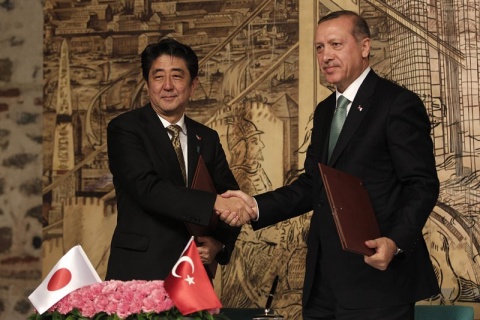 Prime Minister Recep Tayyip Erdogan and his Japanese counterpart Shinzo Abe have signed an agreement on the construction of a second nuclear plant on Turkish territory.

The N-plant, which is to be built near the Black Sea town of Sinop, will have four units and a total capacity of 4,800 MW. The first unit is to go online in 2023 and the fourth unit is to start functioning by 2028, according to reports of Hurriyet Daily News.

The nuclear power plant is to be built by a Japanese-French alliance of Mitsubishi Heavy Industries and French firm Areva.

The official contract for the N-plant project worth USD 22 B was signed by Erdogan and Abe on Wednesday evening.

Turkey's first 4,800 megawatt (MW) nuclear power plant is being constructed in Akkuyu in the southern province of Mersin by Russia's Rosatom.