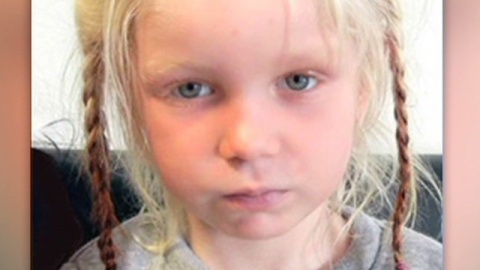 DNA tests have now solved part of the mystery of Maria, the child called the "blond angel" by Greek media after she was discovered during a police raid on a Roma camp in Farsala, Greece. File photo

The homes are built with mud and straw. The streets are dirt and puddles. An old Roma lady gestures that she's so hungry it feels like her belly has been slit.

This is Nikolaevo, a tumbledown Roma village in the heart of Bulgaria. If fate had dealt a girl known as "Maria" a different hand, she would have grown up here, surrounded by decay and poverty.

DNA tests have now solved part of the mystery of Maria, the child called the "blond angel" by Greek media after she was discovered during a police raid on a Roma camp in Farsala, Greece. Her birth parents are Bulgarian -- Saska Ruseva and Atanas Rusev -- and, like the Greek couple who had been raising Maria, they, too, are Roma.

"Maria's parents live by selling herbs they collect in the forest or recycling scrap metal. They get child support payments, too, but that's never enough," a neighbor who gave his name as George said.

Maria's biological family live in a one-room home made of the same mud bricks as the rest of the village. The walls have been whitewashed, and a single window is partly covered with a pane of glass, the rest with a sheet of plastic.

The inhabitants of Nikolaevo complain that when it rains, the houses flood and the mud buildings get drenched.

When we called at the home Friday, a few hours before the DNA match was confirmed, the Rusevs had left. Producers at a national TV station later confirmed they had paid for them to go to the Bulgarian capital Sofia, a three-hour drive away, for an interview scheduled to air Sunday night.

The previous day, however, Saska Ruseva had spoken to CNN's sister channel in Bulgaria TV7. She denied allegations she had sold her baby in Greece or that Maria had been trafficked abroad by a criminal gang.

"We gave her away. I didn't take any money. I didn't have any food to give to her. Since I saw her on the TV, I've been sick," she said.

Ruseva also said she did not initially name the girl "Maria" but had intended to call her "Stanka."

Even though the Rusevs had left the village for the weekend, two teenagers who say they are Maria's brother and sister -- 13-year-old Angel and 14-year-old Minka -- were home alone.

He doesn't speak Bulgarian -- neighbors were on hand to translate our conversation. Angel like many in Nikolaevo speaks only Turkish.

That, for historical reasons, is the language Roma speak here. Their ancestors arrived in the Balkans as soldiers or auxiliaries in the armies of the Ottoman Empire some 500 years ago.

A day's drive away across the border, Maria, now believed to be 5 or 6 years old, speaks no Greek. She has grown up speaking the Roma dialect, derived from ancient Sanskrit. That was the language Romas spoke when they migrated from India more than 1,000 years ago.

I caught up with a woman who says she's Maria's big sister --- Saska Ruseva's eldest daughter -- 20-year-old Katia, in the next village, Gurkevo.

She has very pale skin, white-blond hair tinged with red, and her eyes are bothered by bright sunlight.

Maria, too, is very fair. And in the Roma camp where she was found, residents said Maria had been born with an eye problem, but they were unable to specify the exact diagnosis. When she was cured, the Roma threw a special celebration.

Katia explained to me that mother Saska had traveled to Greece in 2009 to work on the orange harvest.

"My mum was pregnant at that time and gave birth, but she did not have the money to bring her baby home. She did not sell Maria but left her there and came back to Bulgaria to try and arrange the documents," she said.

Investigators on both sides of the border, however, doubt that version of events. Christos Salis and Eleftheria Dimopoulo, the Greek Roma couple who raised Maria from a few months old, are still in custody charged with kidnapping.

And on Friday afternoon, Bulgarian police said they had launched a criminal investigation on suspicion the Rusevs had sold Maria for illegal adoption.

Law enforcement sources in Greece say Bulgarian women have in the past been detected traveling heavily pregnant into Greece. They say once they give birth they pass their children off to childless Greek couples for an agreed payment.

Underscoring those assertions, Greek police said Friday they had arrested a non-Roma Greek couple in Athens on charges of trying to buy a Roma baby for 4,000 euros (,500).

Investigators have not given any hint how long it may take to prove or discount their allegations that Maria may have been the victim of an illegal adoption.

What is immediately clear, though, is that she, like many Roma children, is a victim of crushing poverty. The European Union says of the estimated 12 million Roma in the EU, 90% live below the poverty line.

In Nikolaevo, many inhabitants say they, like Maria's parents, regularly travel to Greece to harvest fruit and vegetables.

In Greece, impoverished Roma in the camp where Maria was found say they are now faced with competition for farm jobs from Bulgarian, Romanian and Albanian Roma who are even more desperate than them and ready to work for as little as 10 euros a day.

As I said goodbye to Katia, she asked if Maria would be allowed to come home to the family.

"My mother really wants her to come and live with them. She's been crying, and she's so worried," she said.

For now, there seems little immediate prospect of a family reunion.

Bulgaria's Child Protection Services went to Nikolaevo on Friday to carry out what they said was an assessment of Saska Ruseva's "suitability as a parent" and the family's living conditions.

By nightfall, the same state officials were back with police to take Angel and Minka into protective care.

A female relative had taken in the youngsters. She began to wail loudly at the prospect of the adolescents being taken away.

Just then, we saw another neighbor dodge past the police officers and help Angel and Minka slip away into the night.