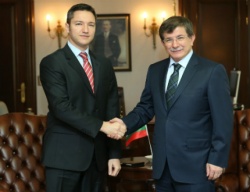 Bulgarian Foreign Minister Kristian Vigenin met with his Turkish counterpart Ahmet Davutoglu during a visit to Ankara on Saturday.

Vigenin and Davutoglu discussed a wide range of aspects of bilateral relations such as transport, energy, commercial and economic ties, cooperation in security, tourism, etc, according to the press office of Bulgaria's Foreign Ministry.

"Migratory pressure as a result of the humanitarian crisis in Syria and across the region is a topic which affects both Bulgaria and Turkey. Unfortunately, the challenges have already spread to the territories of our two countries and we can only achieve more significant results through coordinated, joint activities," Vigenin declared.

Vigenin emphasized that Bulgaria was aware of the difficult situation the Turkish government was facing due to the situation on the border with Syria and assured that the serious measures taken to get the situation under control were appreciated.

"Despite the efforts of the two countries, immigration pressure on Bulgaria is growing to intimidating proportions, which made the Bulgarian government adopt a decision to build temporary engineering facilities on our shared border in the most critical area in the region of the city of Elhovo," Bulgaria's Foreign Minister added.

The two Foreign Ministers discussed the issue of restarting the Central Joint Bulgarian-Turkish Border Committee,  in line with the existing Agreement on Preventing and Solving Border Incidents and Maintaining State Border Signs between Bulgaria and Turkey, which was to outline concrete measures.

Vigenin emphasized that an EU-turkey readmission agreement would give Bulgaria additional opportunities to cope with the refugee flow.

He assured that Bulgaria had brought up the issue of fast-tracking the visa liberalization road map and the signing of the readmission agreement at the highest political level before the EU institutions.

"We see Bulgaria not only as a neighbor but as a door in transport, energy sphere and economic relations with Europe. Turkey also is a door, a bigger one to the Middle East and the Mediterranean," the Turkish Foreign Minister stated.

Vigening invited Davutoglu to visit Bulgaria in order to ensure the continuation of the active dialogue between the two countries.