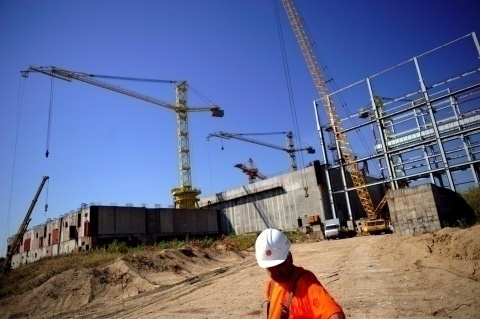 The Belene NPP has been de facto frozen since the fall of 2009 when RWE, which was supposed to provide EUR 2 B in exchange for a 49% stake, pulled out. Photo by EPA/BGNES

Bulgaria has been granted a deadline extension in the arbitration case initiated by Atomstroyexport against the state-owned National Electric Company.

The deadline extension in the arbitration case over unpaid equipment produced for the frozen Belene Nuclear Power Plant project was reported by mediapool.bg on Friday, based on a statement of the National Electric Company (NEK), which faces a EUR 1B claim.

By Friday, October 25, international law firm White&Case, which defends NEK in the case, was to submit the stance of the Bulgarian state-owned power company and to present the names of the witnesses and expert witnesses who would speak in support of NEK.

White&Case were hired by the previous center-right GERB government to defend Bulgaria in the arbitration case.

Due to the delay in the preparation of the defense and the witnesses, which White&Case announced in a letter to Economy and Energy Minister Dragomir Stoynev, Bulgaria requested a postponement and the request was approved.

The new deadline for Bulgaria to submit the documents is December 6, 2013.

NEK commented that the demand of White&Case for a change to the procedural schedule was normal practice in law and arbitration cases and noted that Atomstroyexport, which had given its consent, had also taken advantage of that option at an earlier stage of the proceedings.

Bulgaria's state-owned power grid operator noted that the rescheduling had been requested in order to guarantee that the interests of NEK would be protected and that the processing and analysis of a substantial volume of materials would proceed at a normal pace.

Apart from that, the claim of Russian Atomstroyexport against NEK and the counterclaim of NEK against the Russian company have been united.

According to mediapool.bg, the Bulgarian claim is worth EUR 62 M but it is unclear how things will develop, taking into account that Atomstroyexport argued that important documents concerning the deal for the reactor produced by Czech Skoda for the Belene NPP and bought by Atomstroyexport as part of their offer for building a new N-plant in Bulgaria, had been destroyed in a fire, while NEK told the prosecuting authority that they did not have at their disposal the invoices in question and the takeover records for the equipment.

It is unclear how postponing the submission of he Bulgarian stance will affect the progress of the arbitration case and the hearings of experts scheduled for July 2014.

In mid-July 2011, Russia's state nuclear company Atomstroyexport initiated proceedings at the International Court of Arbitration in Paris against Bulgaria's NEK over EUR 58 M in delayed payments for its work on two nuclear reactors.

On the following day, the Bulgarian company said it was ready to strike back with a EUR 61 M counterclaim against Atomstroyexport over delayed payments for purchases of old equipment for the plant, worth about EUR 300 M.

Atomstroyexport, a subsidiary of Rosatom, said it had increased the claim to cover construction work and production costs of the two canceled nuclear reactors.

In 2005, Bulgaria selected Atomstroyexpor to build two 1000-MW reactors at Belene and signed a deal for the construction, allegedly for the price of EUR 3.997 B with the Russians during Vladimir Putin's visit to Sofia in January 2008.

In September 2008, former Prime Minister Stanishev gave a formal restart of the building of Belene. At the end of 2008, German energy giant RWE was selected as a strategic foreign investor for the plant.

The Belene NPP has been de facto frozen since the fall of 2009 when RWE, which was supposed to provide EUR 2 B in exchange for a 49% stake, pulled out.