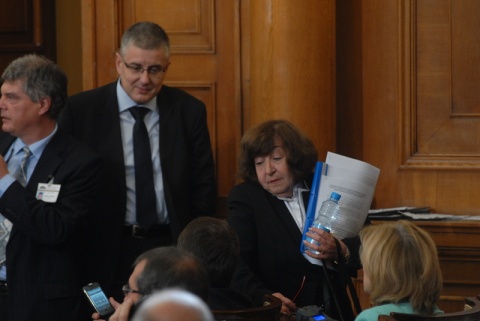 Karaivanova submitted her resignation to Parliament on Friday during a discussion on an annual report on the activity of the VSS and the VSS Inspectorate for 2011. Photo by BGNES

She submitted her resignation to Parliament on Friday during a discussion on an annual summary report on the activity of the VSS and the VSS Inspectorate for 2011, according to reports of Sega daily.

Justice Minister Zinaida Zlatanova, as cited by dnevnik.bg, criticized Parliament for failing to conduct a procedure for the election of a successor of Karaivanova for over six months.

"As I realized over the past few days that the main obstruction before judicial reform was the fact that I held the post after the expiration of my term in office and that this was going to be the main cause for the negative report expected from the European Commission, I would like to declare that I submitted my resignation to Parliament. It's your play now, dear Members of Parliament," Karaivanova stated.

She added that the Parliament had finally invited her to present a report on her activity.

She assured that in its first four-year term in office, the VSS Inspectorate had sought to fulfill the tasks defined in its own statute, i.e. to exercise comprehensive and efficient control over a total of over 350 judicial bodies and to identify the problems.

Karaivanova was appointed Chief Inspector at the Inspectorate of Bulgaria's Supreme Judicial Council during the term in office of the three-way coalition government.

According to dnevnik.bg, the main reason for the failure of Parliament to appoint a successor of Karaivanova is the fact that the candidate needs the support of a qualified majority of MPs and it is not possible at the current stage to receive the approval of 2/3 of MPs for a nominee.