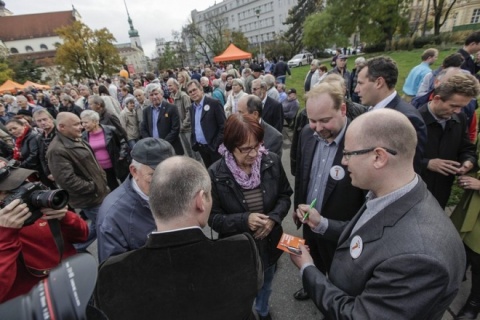 Czech voters are going to the polls Friday and Saturday to cast ballots in early parliamentary elections.

The Czech parliament was dissolved in August following weeks of turmoil in Czech politics.

Prime Minister Petr Necas' government collapsed in June amid a bribery scandal, and a government of technocrats, formed by President Zeman in July and opposed by the main political parties, resigned in August.

Polls forecast a victory for the opposition parties on the left.

The ruling right wing is set to suffer a loss amid voter's frustration with austerity, stagnating living standards and corruption.

According to polls, the main opposition Czech Social Democrats (CSSD) will be the winners with about 25-30% of the vote, although support for it showed slight decline in  recent days.

Meanwhile, the hardline Communist Party of Bohemia and Moravia (KSCM) is likely to get 15% and might rule, albeit in coalition, for the first time since the 1989 Velvet Revolution.

This prompted David Cerny, famous and controversial Czech artist, known for his strong anti-communist stance to float a huge purple statue of an extended middle finger down the River Vltava. The giant purple hand has been mounted on a barge floating on the river and is pointed at Prague Castle, the seat of President Milos Zeman.

The Civic Democrats (ODS) (formerly led by Necas) and the other right-wing parties in the coalition will suffer a heavy blow, according to forecasts. Some polls put ODS as low as 6.5% while the threshold for parliamentary representation is 5%.