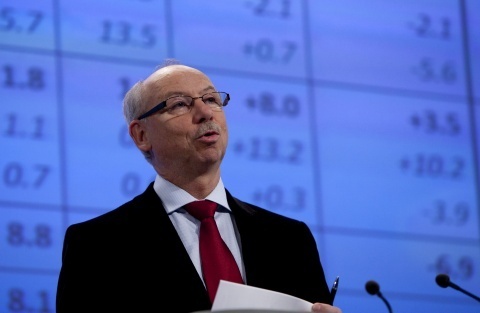 Janusz Lewandowski, the EU's budget commissioner, has blamed Britain, Germany and other countries for the crisis because they had tried to cap EU spending leading to "continuous under budgeting".

"Some of them take a pleasure in always being against and this is really causing the problem we see ourselves confronted with," he told MEPs.

Тhe European Union has voted through EUR 2.7 B in new cash contributions from national treasuries after senior officials warned of the threat of chaos and unpaid EU bills.

Lewandowski warned that the cash shortfalls meant that the commission "had stopped signing new contracts" and that even with the additional emergency money "there would be a shortage in 2013".

Nigel Farage, the leader of Ukip, said that if the EU was having trouble with paying bills then it should sell off assets before demanding extra contributions from cash-strapped governments.

"If the EU can demand that countries like Greece and Portugal sell their assets to raise money, then why not the EU as well," he said.

"The EU in Brussels, Luxembourg and Strasbourg has huge chunks of expensive real estate which could raise a lot of money."

The amending budget is needed because revenue from import duties collected at the EU's external borders is far lower than was forecast by Eurostat (and endorsed by the EU member states) and thus had to be replaced by a higher GNI contribution, according to a statement of the European Parliament press office.

The additional budget will take the cost of Brussels overspends and shortfalls to over EUR 12 B this year and is likely to fuel anger at a summit of Europe's leaders on Thursday.

The emergency decision followed "an alarming phone call" from Jose Manuel Barroso, the commission president, to Martin Schulz, the speaker of the European Parliament.

"Mr Barroso warned that the Commission would no longer be able to pay legitimate bills from November onwards if the additional budget did not come through," said a statement by Schulz.

The European Parliament will vote its position on the 2014 budget on Wednesday.