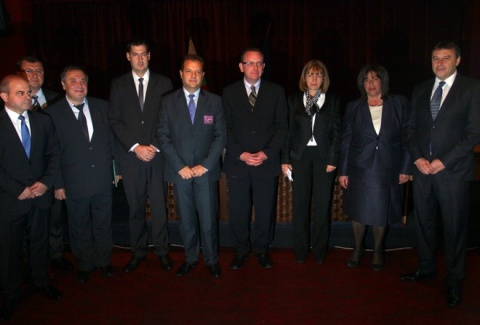 Bulgarian Culture Minister Petar Stoyanovich (center-right) with the mayors of cities contenders for European Capital of Culture 2019, photo by BGNES

The mayors of the candidate cities submitted the nominations at a ceremony at the Culture Ministry on Friday, announced Nova TV.

The Mayor of Sofia Yordanka Fandakova presented the candidature of the capital and the Southwestern region - Blagoevgrad, Kyustendil and Pernik. In Sofia, 30 creative labs have been opened; 16,000 cards with ideas from citizens have been received and 20,000 artists are creating the platform of the website.

The Mayor of Shumen relies on the historical dignity of the city and its surroundings, as well as on the first theater in Bulgaria, while Gabrovo bids on cultural values.

Burgas participates with a regional presentation with Mayor Dimitar Nikolov believing that the millennial history of Nessebar, Sozopol and the uniqueness of Strandza mountain will add some very special touches. Veliko Tarnovo will rely on culture, tourism and spirituality of the old capital.

Varna Mayor Ivan Portnih stressed that Varna was the first Bulgarian city to formally declare its desire to join the initiative and the race. Plovdiv Mayor Ivan Totev said in turn that the start of the campaign was impressive and all were winners because they have already motivated their citizens to work for the cause.

Ruse Mayor Plamen Stoilov added each city was worthy to win, but grounded his application on Ruse being a cosmopolitan city with ancient history and a spirit as eternal as the Danube River, the river that connects Europe.