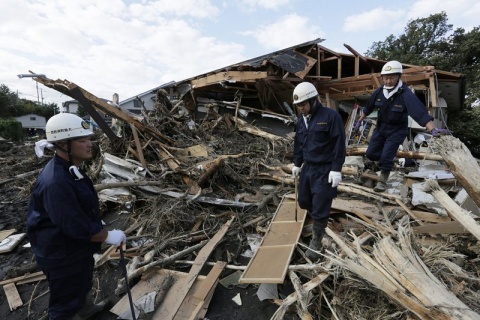 Fire brigade members in Izu island help in the search and rescue operation. Photo by EPA/BGNES

A powerful typhoon swept through Japan's Pacific coast, causing more radioactive leaks at the Fukushima nuclear power plant, which was damaged by the 2011 earthquake.

The worst hit area was Izu island, about 120 km south of the capital Tokyo.

One of Japan's most powerful storms in the last decade also caused higher radiation levels in the problematic Fukushima NPP. Workers there say that the heavy rainfall has lifted contaminated soil.

Radioactive water spills have been a recurrent problem in the region, since the earthquake and tsunami of March 2011.

Tokyo Electric Power Co. has been making efforts to cool down the melted reactor.