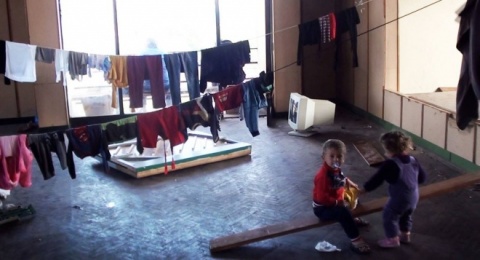 The refugee shelters in the Bulgarian capital Sofia in the Voenna Rampa and Vrazhdebna districts, where conditions are reported as deplorable, have been actually recently repaired.

An investigation of Sega daily showed that repairs in the amount of BGN 565 000, slated by the Council of Ministries, have been done by contractor Geya-DEK at the end of September.

The work has been assigned to the company without a public tender on grounds of urgent need.

"The result is 30 people cramped in one room, sleeping on the floor or on filthy mattresses, peeling wall paint, broken windows, no kitchens and piles of trash," Sega writes.

The manager of the company, Emil Ivkov, told the media that he received the repairs order for Vrazhdebna on September 23, but had to wait for 4 days to start them as the Ministry of Agriculture had to transfer first the property to the Interior Ministry. The repairs, according to him, were completed on September 28, right when the first several buses with refugees arrived at the shelter.

According to Sega, their reporters have seen a large number of refugees already accommodated there on September 26. The site of the State Agency for Refugees has further informed that the first foreign citizens were placed in the Vrazhdebna shelter on September 19, and by September 25, 475 people lived there.

Sega writes the above poses the question how a complete overhaul was done in the presence of so many refugees inside the building.

Ivkov insist the works included new bathrooms and WCs, new sewage and plumbing system, new electric system, removal of old furniture and unloading the new one, provided by the Bulgarian Red Cross, and cleaning. Kitchens have not been installed as there was no space for them and this is why the refugees brought in hot plates which overloaded the electric power fuses.

He blamed the refugees for the miserable conditions and said the amount he received was much lower than the one on the contract, but declined stating an exact sum as he did about naming other contractors that according to him also did work in the shelters.

Ivkov further explained Geya-DEK was only to check the heating at the other shelter in Voenna Rampa and it found out it needed new boilers. He promised heating at the shelter will start working in a matter of hours as it already did in Vrazhdebna.

The State Agency for Refugees has declined comments.

Speaking, however, for the public radio, the Agency's new head, Nikolay Chirpanliev, insisted the initial conditions at the shelters have been "good."

Both, Chirpanliev and Ivkov, said the representation in Bulgaria of the UN Supreme Commissariat for Refugees could vouch for it, as they have monitored the repairs.

"My people worked round-the-clock under the watch of at least two people from the Commissariat," stated Ivkov.

The representation, however, firmly rejected the claim, stressing they have insisted since the very beginning, after two visits in September 24 and October 11, that the conditions in the shelters were extremely miserable and no one ever consulted with them.

They explain the above with Ivkov's possible confusion with employees from the State Agency for Refugees.

"Insufficient beds, bed linen, blankets, food, lack of kitchen appliances, even to boil water to make baby formula, inadequate bathrooms and unsanitary conditions in them and in the center as a whole, need for repair of the heating system, and lack of permanent staff of the Agency on the spot," these are the findings of the Commissariat after their visits to the centers for refugees.

Some time ago, the appalling living conditions there were described identically in a report of the Bulgarian Helsinki Committee.

Meanwhile, the Sofia City Hall says the refugees cost their budget over BGN 100 000 a month for logistics and security.