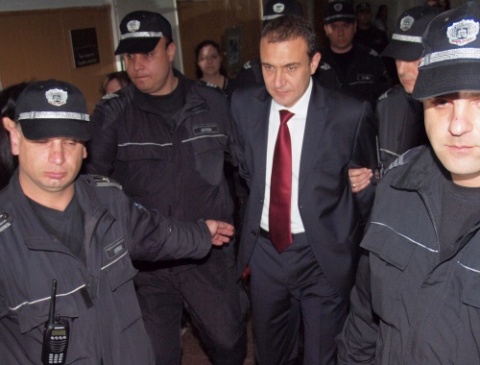 Borislav Gutsanov under arrest back in 2010. Photo by BGNES

The European Court of Human Rights has judged a EUR 40,000 indemnity for Bulgarian Socialist Party MP Borislav Gutsanov over what the court has seen as Gutsanov's prejudicial arrest in 2010.

Back in March 2010, Gutsanov, then chair of the Town Council of third-largest Bulgarian city of Varna, was arrested in the so-called Jellyfish police operation.

The high profile action was among the first of a string of so-called "special police operations" launched by Bulgaria's previous government after assuming power in July 2009, and publicized by former Bulgarian Interior Minister Tsvetan Tsvetanov as leading the cabinet's efforts in the fight against organized crime.

Gutsanov was detained and charged, together with three other persons, for concluding deals that financially injured the Varna Municipality.

In May 2010, he and his wife filed a claim with the ECHR regarding what they saw as excessive use of police force during his arrest, which took place in his home, the presence of his young children.

Gutsanov spent 2 months under arrest, while the Bulgarian Socialist Party protested this as an alleged act of political repression.

In its decision, the ECHR has determined that Bulgarian authorities have breached three provisions of the European Human Rights Convention.

Those include respect for private and family life, and unduly long proceedings against the defendant, who had been subjected to humiliating treatment.

In addition, the Court has determined that some statements by ex-Minister Tsvetanov after the arrest are in breach of the presumption of the defendant's innocence.