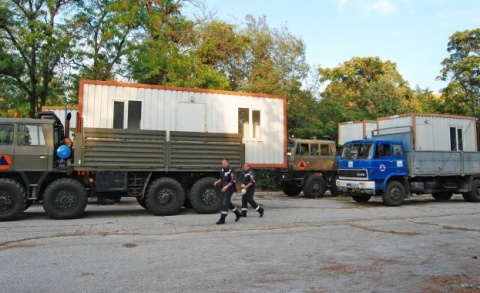 A picture of the new trailers being delivered at the refugee shelter in the Bulgarian southern town of Harmanli. Photo cross.bg

A new temporary refugee shelter has been opened over the weekend in the southern Bulgarian town of Harmanli.

This was needed because the capacity in all other shelters has been exceeded by 400 beds.

The refugees are accommodated in brand new trailers, with modern bathrooms, cold and hot water. The center also has an electric power generator. There is still no translator.

This is the first shelter of this type in Bulgaria. 54 refugees, mostly Syrian nationals, are already housed there.

The center was built on the territory of the former military barracks in the town. It is of the closed type (refugees are not be allowed to walk outside) for the time being and has 450 beds.

The new Chair of the State Agency for Refugees, Nikolay Chirpanliev, visited the shelter Saturday and stated the conditions were excellent. However, for unknown reasons, media were and are not allowed inside.

Chirpanliev says that except refugees and authorities in charge, the law bans others from being in the shelters. He further promised the Agency will speed up the procedure for granting asylum status and refugees will be able to leave the shelter within 21 days.

The opening of the center was preceded by protest rallies of local people who worry about safety and increased crime. The police have reassured them, pledging to maintain public order.